CSK wins the IPL 2011 - End of a well orchestrated campaign 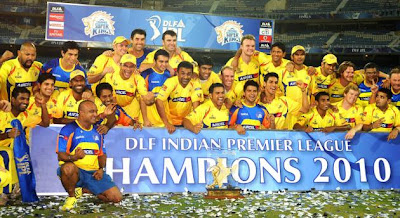 Finally the curtains have rung down on the IPL 2011. As expected it was a blockbuster all the way. The spectators, viewers, sponsors and all concerned had a gala time. Chennai Super kings (CSK) and Royal Challengers Bangalore (RCB) clashed in the finals and CSK came out the winner.
Let us analyze the CSK success second time running. The strategy of CSK was very clear right from the start. Unlike the other Franchisees CSK believed in putting cricket before the lucre of money. They retained 3 Indian players M. S. Dhoni, Suresh Raina and Murali Vijay (All three Indian test players) and one foreign player Albie Morkel. They used up their entire quota of retaining players.  CSK very reluctantly let Michael Hussey go to the auctions.

This is in stark contrast of Deccan chargers (DC) who did not retain even their IPL winning captain Adam Gilchrist. The league almost saw DC finishing at the bottom. Only a late surge saw the chargers finishing at a respectable seventh place.
CSK played it cool at the auctions. They did not bid for Muralidharan and Muralidharan faded right out and took only two wickets for his team the Kochi Tuskers. Similarly Hyden, Jacob Oram, Justin Kemp, Ntini and Parthiv Patel were of no interest to the CSK.
CSK later grabbed Michael Hussey at a cheap price of 425,000 US $. Similarly they bought Doug Bollinger at a price of 700,000 US $ and Dwayne Bravo at a price of 200,000 US $. CSK quietly bought up their earlier team mates like Badrinath, Ashwin, Tyagi, George Bailey, Jakati, Srikanth Anirudha and Joginder Singh.
This way CSK retained 12 of its players who played for it in the first three editions. M. S. Dhoni, Suresh Raina, Murali Vijay, Albie Morkel, Michael Hussey,  Badrinath, Ashwin, Tyagi, George Bailey, Jakati, Srikanth Anirudha and Joginder Singh.
And very interestingly 8 of the 11 players who were either retained or were procured again played in the finals of the IPL 2011. The eight who played the final are M. S. Dhoni , Suresh Raina, Murali Vijay, Albie Morkel, Michael Hussey, Badrinath, Ashwin,  Jakati. The other three who played in the finals are Doug Bollinger, Dwayne Bravo and Wriddiman Saha.
With such amazing home work it is of no great surprise that CSK performed so well in the IPL. CSK is the only team that made it to all the four semifinals. It played three finals and won two of them.
M. S. Dhoni proved to be a brilliant captain. He nursed young played like Murali Vijay and Ashwin almost with a missionary zeal. Murali Vijay easily outshone Chris Gayle. Murali is not flamboyant like Gayle but sealed the final with his sparkling 95. The other of the Dhoni’s favorite Ashwin finished off the match with his first over where he snapped up Chris Gayle for a naught. Game set and match for M.S. Dhoni.
Dhoni proved to be a brilliant tactician too. He chose to bat first in the final and showed enormous confidence in Vijay and Ashwin. Sachin the  great player that he is proved to be a very poor tactician. In the Mumbiaya mould that he is born with Sachin tried to play safe. We can’t really blame him. Sachin is very influenced by  the great Sunil Gavaskar the great defensive captain. 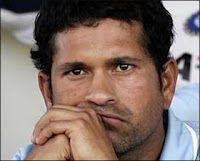 In the Qualifier Sachin won the toss and elected to field. Instead of paying to his team’s strength he tried to play to his opponent’s weakness. Unlike Dhoni who opened with Ashwin, Sachin tried to hide his best bowler Lasith Malinga. The first over bowled by Mumbai in the second qualifier effectively finished the match. Chris Gayle took the bowler to the cleaners and scored 27 runs. Albeit in the same way Dhoni ensured that the finals finished his way by seeing that Chris Gayle gets out in RCB’s first over itself.
CSK played with a swagger of kings that they were. The other finalist of the last year Mumbai Indians always had a scowl on their face. Their new recruits like Symonds, Rayudu and Suman did not live up to the billing. It is time that Sachin gave up the lucrative 2020 IPL and concentrate on test cricket completely. It is a travesty of justice to miss Sachin for the forthcoming Windies test tour.
Come on Sachin let go of the money. You have nothing to prove. Lest of all trying to win  a lottery called IPL. You are not cut out for it. It is better to you to give your remaining years to test cricket. You would be remembered for your contribution for test and one day cricket and not for your contribution for the bang bang thank you mam version of cricket which is what IPL is.
Tail Piece: The purple cap for the best bowler went to Lasith Malinga with 28 wickets and the Orange cap for the best batman went to Chris Gayle with 608 runs. Lasith Malinga’s team finished third and Chris Gayle’s team finished second.

The winners CSK had their man Ashwin finishing as the 4th best bowler with 21 wickets. Similarly their best batsman Michael Hussey finished as the 5th best batsman with 492 runs. It proves the point that cricket is still a team sport even in the 2020 format. No room for the prima Donnas.
Posted by Dr. M. Anil Ramesh at 5:32 PM