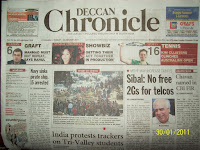 Masthead: This is the logo or the name of a newspaper that is published in a specific style and in specific font. For example the names of THE HINDU, THE DECCAN CHRONICLE or the TIMES OF INDIA are referred to as Masthead. As the name of the news paper is the one that is first noticed it is called the masthead. 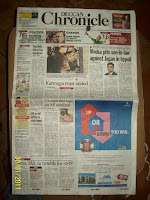 NEWS: When asked how the word NEWS got originated most people are stumped for an answer. The answer is very simple. NEWS comes from North, East, West and South. NEWS gives us information about what is happening from all parts of the country and the world that is why it is called NEWS a acronym of the first letter from the words  North, East, West and South.
Advertorial: Most readers are very skeptical about advertisements. They are all seen as a pack of lies that the advertisers are thirsting down the throats of unsuspecting and gullible readers. The end result is that the advertisements are seen as nuisance and at best are barely tolerated. Most of the press advertisements are ignored. But the newspaper revenue comes from the advertisements.

So the newspapers have devised a system that hoodwinks the readers. They allow the advertisements in the form of news items. The entire advertisement reads liked a news item as if a news reporter is reporting business news.
But as there are watch dogs like the ASCI and the INS watching it with a hawk eye the newspaper puts a statutory warning at the end of the article and calls it the advertorial. It means an advertisement that reads like an editorial. Advertorials should be used with extreme caution and wisely as the readers catch up with the novelty of the concept and start treating them like regular advertisements.
Posted by Dr. M. Anil Ramesh at 9:02 AM