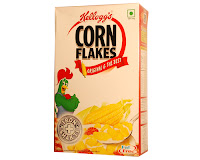 Kellogg did lot of home work and launched its products in India. They had the best products, packaging and their marketing strategy was excellent. The advertising campaign was handled by a leading Indian advertising agency.

Kellogg did not do as well as expected. The witch doctors (read marketing research firms) were called in. The research findings were very surprising. The areas where Kellogg went wrong include:

2.   Indian breakfast is known for its variety. There can be 30 types of Dosas (there is a restaurant in Hyderabad that offers 99 types of Dosas!) or Idlis, Parantas or other types of native Indian breakfast items. Indians are used to a variety and one item that is eaten will not be on offer for the next two or three weeks. Asking Indians to have the same type of corn flake based breakfast was too much of a cultural change for the Indians to accept.

3.   Indians have spicy and hot food for breakfast. To ask them to eat the sweet tasting and cold corn flake breakfast was too much of a sweet breakfast for the Indians to digest.

5.   Kellogg corn Flakes have to be consumed with cold milk. Indians have be taught right from their childhood that milk has to be consumed every day and that milk should always be consumed hot. In a tropical country that is very logical. If the milk is bad once it is heated it will become undrinkable. So for the Indian family eating corn flakes with cold milk was unbearable. So hot milk was poured over the corn flakes. Once hot milk is poured the corn flakes become soggy and there are no longer tasty and edible.
Posted by Dr. M. Anil Ramesh at 11:06 AM