What's in a name - Origins of Hyderabadi Street names! 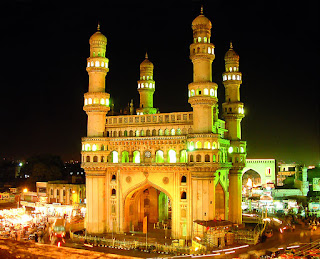 What in a name one might ask? I would say everything especially if you are from Hyderabad. The Hyderabadi names are exotic, funny, and quixotic. Where else in the world can you find Domalguda, Koranti, Abids etc.

Hyderabad itself has many theories as how it has got its name. One of the theories is that Hyderabad was once called as Bhagnagar which stands for ‘city of gardens’. There were a a number of gardens in and around the city of Hyderabad, such as Bashir Bagh, Amin Bagh, Bir Ban Bagh, Hardikar Bagh, Bagh Lingampally and Jam Bagh etc. Hence it was called as Bhagnagar later to be called Bhagyanagar.

Residents of Domalguda always say that their locality is aptly named. This they do while swatting the mosquitoes. Domal in Telugu means mosquitoes and Domalguda means a place where mosquitoes stay. Way off the mark. The locality gets its name from Do Mahal a mosque. Over the centuries Do Mahal Guda became Domal Guda. One another version talks about the area having two famous wrestlers and the area was initially called Do-mal and because of them the area is called Domalguda.

Koranti is neither telugu or hindi nor urdu. Koranti is actually a hospital the very popular fever hospital.  So how does this locality get its name? It gets its name from Quarantine (a place where patients with contagious diseases are segregated till the disease is treated / cured). Like wise Masab Tank gets its name from Maa Sahaba Tank that today has become the Chacha Nehru Park.

Hyderabad has exotic localities like First Lancer, A C guards gets its name after African Cavalry guards of the Nizam of Hyderabad. They are rememberances of the military past of Hyderabad. Golconda the famous monument is actually Gollakonda; Golla means Yadav and Konda means hillock and it was the ruled by the yadava Kings. Bowenpally the bustling locality in Secunderabad most probably got its name from Boyinas (meaning Palanquin holders) who lived in that locality.

Abids the popular shopping area has very interesting origin. Abid was the owner of the first shop in this bustling locality. Albert Abid was a Jewish merchant and he opened the first departmental store. The entire locality is called Abids. The place where Abid store stood later became palace cinema which later became big Bazaar.

Near Abids is Gunfoundry or Tope ka sancha which was built by a French General – Monsieur Raymond. It was one of the several cannon and cannonball factories set up in 1786. So the locality is called Gunfoundry. The locality houses headquarters of the famous State Bank of Hyderabad,

Lakidikapul gets its name from Lakidi meaning wood and Pul means a bridge. The name means wooden bridge. What a romantic name! There are places named after communities like Banjara Hills, Baider wadi, Bhaldar wadi, Brahmin wadi, Kumhar wadi, mehtar wadi, Chakna wadi (derived from the intestines of sheep).

Another interesting name is Tarnaka. Tarnaka is derived from ‘Tar’ which means ‘wire’ and ‘Naka’ meaning ‘guard room’. It was thus called because the Nizam barbed the area and put up a guard room to protect his fruit gardens in the area.

Chaderghat, a locality too has a very interesting name. The locality was so called after an anicut across the river which formed a ‘Chaddar’ or a ‘sheet of water’. Chaderghat bridge or Oliphant bridge was built by Col. Oliphant during the reign of Nizam Nasir-ud-Daulah. Another peculiarity of the names of localities in Hyderabad are unlike the names of places in any other city, is the addition of suffixes such as gudas, bads, baghs, kuntas, metlas, nagars and pallys are frequent and common. Long live Hyderabad and all its places, people and cultures.

Email ThisBlogThis!Share to TwitterShare to FacebookShare to Pinterest
Labels: Hyderabad