Swiggy and Netflix - Me too strategy, complimentary products and Generic competition 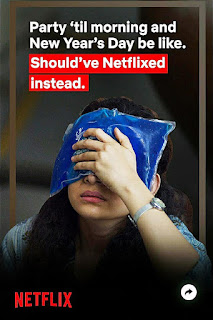 Always told my students to watch ads and learn from them. "Watching ads is the most fun one can get with their clothes on". Not my phrase, taken from an ad guru.
The picture is from a TV Ad of Swiggy. The ad urges us to cook some dishes at home and get some from Swiggy. I think Swiggy is taking our criticism that they are weening us away from the so-called healthy home-cooked food a little too seriously.
So if you can't avoid the bandwagon, jump into the gravy train! Swiggy is meeting us halfway. It is telling us to cook at home but spice up our meal with some side dishes, courtesy Swiggy. Reminds me of Kellogg.
Kellog quickly understood that it can't be a substitute for the elephant in the house, the Indian breakfast. So instead of fighting the Indian breakfast, it became me too. Eat whatever you want to (grudgingly accepted by Kellogg) but eat me too. From being I, me and myself, it wants to be me too. Like from a single hero film to a multi starrer!
Similarly, Netflix is pitching itself as a genetic competitor, one who is competing for the same time spent. It is telling us not to try to get hangover by partying on 31st December 2019. But what about the hangover that we get from binge-watching mind-numbing TV soaps, serials and movies. Food for thought. Bring it on marketers, loving it!