Religion and advertising - Look before you leap 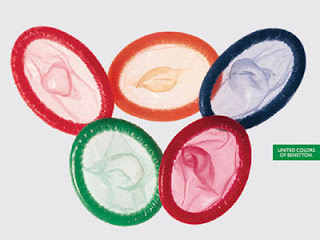 Products needs promotions and marketing a product without promotion is like winking at a girl in darkness. Fully convinced marketers are leaving no stone unturned to garner eye balls. The case of United Colors of Benetton can be taken as example of a company that shocks for shocking sake. Their advertising campaigns are deliberately provocative and tend to generate lot of noise, furore and finally get banned. But they serve the purpose - United Colors of Benetton gets talked about and gets free publicity. 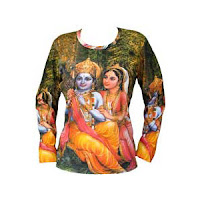 Recently a shocking trend has been noticed. Religious symbols, religious figures and pictures of gods and goddesses have been used to promote products. Sometimes it could be a innocent mistake. One former Indian captain signed his name on the brand of shoe that he was endorsing. As the name of the captain is also the name of a holy person it created a furore and the caption had to tender a public apology. 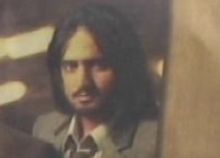 Similarly Shiromani Gurudwara Prabandhak Committee (SGPC) had objected to an advertisement of Cricket star Harbhajan Singh that featured him with his hair open. Sikh Religion does not permit Sikh men to open their hair even at the time of eating. Later Harbhajan Singh apologized to the SGPC. 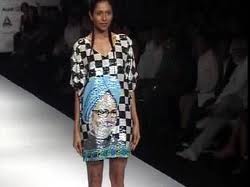 In a recent fashions show in Delhi the visitors were shocked to see a model wear a dress that has the image of the Prime minister of India Dr. Man Mohan Singh. 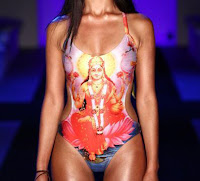 International designer Lisa Burke had to scrap her swimwear line for Australia Fashion Week after protests by Hindu groups at her use of images of the goddesses on bikini bottoms. She apologized and halted production of the bikini line.
A statement issued by the designer's company of Lisa Burke claimed that usage of the goddess's image was "an attempt to celebrate different cultures".
Italian designer Roberto Cavalli similarly seven years ago had to hastily withdraw his spa line after the eruption of the Hindu sentiment the world over. His usage of images of Lord Ram, Vishnu and Goddess Saraswati on intimate wear for women was the reason for the outrage.

Heidi Klum used Kali as a Halloween outfit, and popular brand Guess sparked protests with tank tops that sported Lord Ganesha images and the words "Handsome elephant!”
Danish cartoonists who drew cartoons that made fun a major religion had to face death threats and the sale of Danish products suffered in many countries as the citizens boycotted Danish products.
Marketers have to remember that they are not operating in vacuum. They are part of the bigger scheme of things and they need to understand that religion is one thing that is very personal and tends to whip up emotions. A small spark is enough to ignite the cauldron. Indian news papers have understood this aspect and thread very cautiously when dealing with the issue of religion. 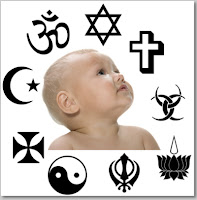 Irani cafes in Hyderabad have become very smart. One Irani café very boldly says “Do not discuss religion, politics and horse racing”. All three topics lead to time consuming discussions and to heart burn. An eatery wants his clientele to eat and exit. Customers who sit and talk for hours together are a drain on resources!
Posted by Dr. M. Anil Ramesh at 2:51 PM