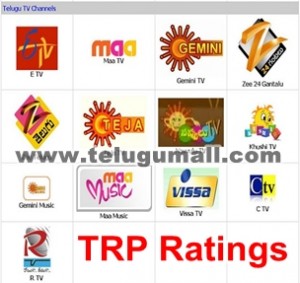 TRP is television rating point which are an audience measurement  criterion that indicates the popularity of a television channel or programme. The TRP measure is very useful for advertisers, who use it to help them decide which TV channels and programmes to place their advertising in.
The advertiser is very curious to find out which of the channels and programmes are popular. The TRP are critical as TRPs will decide where the advertising money will be put. In a country as big as India it is imperative that data be collected scientifically.
The TRP is a measure of the purchased points representing an estimate of the component of the  target audience  within the gross audience.
The first TRP rating measurement was through a people’s dairy where the respondent was given a dairy where he is supposed to note down all the programmes that he/she has watched. But unfortunately the respondent rarely noted down the progarmmes that were watched immediately. The respondent would inevitable scribble down the programmes on Sunday just before the enumerator (the person who collected the weekly reports) arrived.
Collection of TV audience data in India: Presently, In India INTAM (Indian television audience measurement) is the only electronic rating agency functioning in India. INTAM uses two methodologies for calculating TRPs.
The first is frequency monitoring, in which  people meters are installed in sample homes. People meters are electronic devices, which continuously record data about the TV channels watched by household members. The 'people meter' is an expensive piece of equipment and is currently imported. It reads the frequencies of TV channels, which are later decoded into the name of the channels. INTAM prepares national data on the basis of these sample homes readings. There is a drawback in the technique, as  cable operators  frequently change the frequencies of channels before sending signals to homes. It may be very misleading to read a channel according to a particular frequency even if the down-linking frequency is same all over India.
The second technique is more reliable and relatively new to India. Via a picture-matching technique, the people meter continuously records a small portion of the picture that is being watched on that particular television set. Along with this, INTAM also records all the channels' data in the form of the small picture portion. Data collected from the sample homes is later on matched with the main databank to interpret the TV channel name, in order to produce national ratings.
But TRP ratings should be accepted with caution. In a country as big as India it is very difficult to extrapolate the results of TRP to the general population based on the small sample. Just because a programme has a TRP of 5.7 does not mean that 5.7% of India has watched the programme. But like a friend was commenting it is better to have something rather have nothing at all!
Posted by Dr. M. Anil Ramesh at 9:38 PM