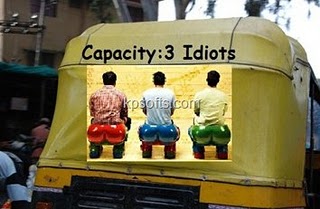 There was a time when film promotion in India was limited to trailers, posters and hoardings. Filmmakers and actors have given up outdated methods to try something new. Celebrities are leaving no stone unturned to promote their films.

Aaamir Khan wanted Google to replace its search button with the word 'Talaash' (Talaash means search in Hindi) in India. Despite hectic parleys the brilliant marketing ploy did not work out. Google was worried about the dilution of its carefully crafted and nurtured brand name. It would have been a win for Talaash but a loss for Google. Typing Google and getting Talaash on the screen would have confused even Hindi knowing Indians. The plight of a non-Hindi knowing person in India (and they are a majority in India) would have been horrendous.

Aamir Khan did a two-week country tour called "Bharat Darshan" in different get-ups as part of his promotion of the movie "3 Idiots".

Aamir Khan became a barber for his fans to promote his blockbuster hit "Ghajini", offering people his "Ghajini" haircut.

For “3 Idiots”, Aamir got stickers pasted on the back of auto-rickshaws in Mumbai to market the film. The stickers read “Capacity: 3 Idiots Only”.

Ramgopal Varma’s publicists worked 24/7 a week before the release of his latest film “Bhoot Returns” to send news stories to every paper in town that the child star Alayana Sharma’s mother has filed a case against the filmmaker because the child was affected badly after she saw the film.

Salman Khan launched a nationwide hunt for unsung heroes to connect with the masses and also promote his period film "Veer".

Sridevi appeared on KBC along with her director to promote the movie “English-vinglish”. Sridevi  also took time out to promote her film dancing with Madhuri Dixit in the show “Jhalak Dikhla  Jaa”.

Vidya Balan had gone to different Indian cities in a pregnant avatar just to promote her film “Kahaani”. 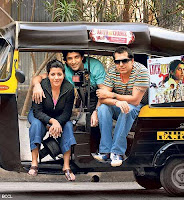 The makers of the movie “Luck by Chance”  started a campaign in Mumbai by branding some auto-rickshaws as ‘Auto By Chance’ and those, who spotted these autos, were given free rides anywhere in the city.

Producer Asit Mehta shot three episodes of his popular show “Tarak  Mehta  Ka Oolta Chasma”  with Ajay Devgun, Abhishek Bachchan, Asin and Prachi Desai with director Rohit Mehta by making them appear in a press conference for “Bol Bachchan” with real life journalists like Inder Mohan Pannu, Rajesh along with the members of the Gokuldham Society who appeared as gate crashers in the press conference.

Ranbir Kapoor came  in  serials  like  “Afsar  Bitiya”, “Phir Subah Hogi” and “Pavitra Rishta” to promote “Barfi” because he knew a lot  of women  are  watching  these  shows and they would come and watch him in Barfi.

Akshay Kumar had gifted his favorite bike to a contestant in Entertainment “Ke Liye Kuch Bhi Karega” before the release of  “Action Replay”.

Imtiaz Ali had asked people to vote for one of the three title options, before naming his film “Jab We Met”.

The movie industry has gone techno-savvy to use social networking sites like Facebook, YouTube and Twitter to connect with their audiences. Today, making a great movie is not enough. It has to be accompanied by a great marketing plan to taste success at the box office.

Eros one of the movie distributors struck an alliance with Google’s Youtube, and has its own partner channel on the video sharing site that gets over 100 million views, markets its videos on websites like MSN, Rediff, AOL, Yahoo to drive the audiences to its content.

Typically, total marketing budgets of a Bollywood movie comprise 30 per cent of which 15 per cent is spent on digital marketing.
Posted by Dr. M. Anil Ramesh at 3:04 PM