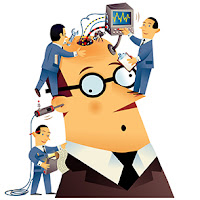 One of the most interesting fields in marketing is research. Which is re searching or revisiting things that we think we know or assume that we know? Companies need to look at themselves with a more critical eye to find out things that they fail to see or refuse to see. In other words navel grazing or revisiting the blind spot in Johari’s window.

Sometimes in administering a questionnaire an interviewer or the researcher might be confronted with an quaint situations. It is a situation where the researcher knows that the information provided by the respondent is inherently wrong but can’t refute or say that the information is wrong. Any such action of refuting or contradicting the respondent would mean that the interview would be terminated. So what is the way out? The researcher has to be smart or street smart. Let us check out the situations where this happens.

Some aspects of behaviour would get more reported and some would be reported less. Respondents are smart and can figure out things that are socially acceptable. So things like reading books, textbooks, reading of magazines like Readers’ Digest, Business world, Business India and Business Today would be reported more than actual usage or readership.

Milk consumption would be reported more than actual consumption. Answers to the question about milk drinking could lead to a situation where a family of four people is reporting usage of around 6-7 litres of milk per day. By any stretch of imagination that is a very high figure. A little bit of homework and a little bit of investigative leg work could lead the researcher to the milk vendor from where the family buys the milk. A comparison of actual vs reported milk usage can be plotted and the percentage of excess milk consumption being reported can be worked out.

It is difficult to get to peoples’ real feelings. A question like “have you cheated in the examination” would normally get an indignant “no” as an answer. But a cleverly phrased question “Do you think that your friend cheat in the examination” would get a result. Thinking that the question is meant for his friend and not himself the respondent would give out his own opinion as that being the behaviour of the friend. The researcher would simply mark the answer as the opinion of the respondent himself.


If the income is being reported less than the actual income the researcher only needs to look around the house. A big LED TV, wall to wall carpeting and even an address in a posh locality are shouting indications of the respondent’s actual higher income than the claim that is being made out in the questionnaire.
Posted by Dr. M. Anil Ramesh at 4:20 PM