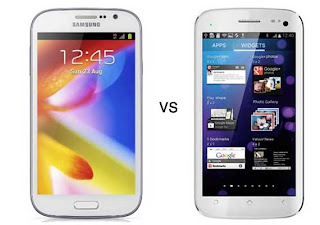 The first three months of the year have seen so much action around mobile flagship devices, yet the launch of two devices- the Micromax A116 Canvas HD and the Samsung Galaxy Grand Duos I9082 - has brought the focus back on the mid-range segment. Both these devices pack in 5-inch displays and dual-SIM (with dual-standby) capabilities, run the Android 4.1 Jellybean version, and offer buyers similar specs in terms of camera (8MP), battery and memory specifications. Does the Samsung juggernaut steamroll the more competitively priced Canvas HD, or does the local underdog prevail? I pit both phones against each other on 5 key parameters to see which one triumphs.

Display: Score one for the Canvas HD, which features a 1280 x 720 pixel display in its five-inch screen as compared to the lower 480x800 pixels on the Grand. As a result, images, text and videos are sharper, though contrast issues make the experience seem a tad washed out when compared to the Grand. Has to be said that despite the lower resolution, the Grand display isn't bad, per se, but scrimping on a 720p display when a far cheaper handset packs one in seems odd. Winner: Canvas HD, by a whisker.

Build Quality: While both phones make heavy use of plastic in their design, the Grand felt better and more refined in the hand, not to mention thinner, almost like a budget version of the SIII. While the Galaxy Grand is wider, the Canvas HD is longer, so it sits better in smaller-to-medium-sized hands. In either case, both devices punch above their weight and feel a lot more expensive than their price suggests - especially true with the Canvas HD which feels leagues better in the hand than previous Micromax phones. Winner: Galaxy Grand, for its refinement and the extremely handy flip cover that's included in the retail pack.

Performance: In terms of sheer horsepower, the quad-core chip under the Canvas HD's hood blows the dual-core-based Grand out of the water, even though you really have to push the two devices to see the extra grunt that the Canvas HD packs come into play. That said, the Grand is no slouch, and both handsets breeze through everyday tasks with ease, and you only see the Grand stutter under heavy multitasking and some of the latest graphics intensive games. Winner: Canvas HD, for packing in so much more for less.

Interface: A thinly skinned, almost-pure Android experience vs. Samsung's proprietary TouchWiz skin? Ordinarily, I'd prefer the former, but in this case, the better social sharing options and neat software add-ons (like the split-screen view and the gesture support that's usually to be found on their more premium devices) tilt the discussion in favor of the Grand. Winner: The Samsung Grand

Camera: Both cameras perform well in well-lit conditions, but come evening, the Canvas HD's low light performance takes a massive hit - not so with the Grand. In fact, you could possibly consider the Canvas HD's camera its biggest drawback. Winner: The Samsung Grand.

Battery Life: Battery life for both is middling in that they both last a day (just about), though even with the extra hardware that the Canvas HD packs, it doesn't drain out quite as quickly as the Grand does. Considering that the Grand has a large 2000mAh battery, this is surprising. Winner: Canvas HD

Media Playback: With good playback support in both handsets, playing movies is a cinch on either. Keep in mind though that the onboard storage and expandability on the Grand is double that of the Canvas HD, so if you're a media maven who absolutely must have a bunch of movies and numerous playlists wherever you go, the Grand is a better choice. My out-and-out choice for music and audio quality would go to the Grand, and the great pair of included headphones help its cause a fair bit. Even though the Grand packs in a lower resolution screen, the movie watching experience on the Grand is leagues ahead of the Canvas HD thanks to the great sound quality and high contrast levels. Winner: The Samsung Grand.

Price: Things are neck and neck for the moment, but here's the clincher — the Canvas HD is cheaper than the Grand by about Rs. 8,000! Is the Samsung branding and the promise of better after-sales worth that much? Not in my books! Winner Canvas HD.


The above is  not my article but an article written by Tushar Kanwar of the Business World. But I take off from the article. Micromax has taken on a David who took on a Goliath itself. In short Samsung has taken on Nokia and won hands down. Now Micromax wants to do a Samsung on Samsung itself.


Samsung has distanced itself from others in the smartphone, Tablets and other technology driven mobile phone business. It emerged as a market leader through out the world. Micromax the smart Indian Mobile manufacturer has latched onto the same platform albeit with a difference. Micromax wants to be a low priced Samsung. In other words it is a poor man’s Samsung. It offers the same features, same quality and is almost the same as Samsung but at a very different, low price, affordable price point. Micromax ploy is proving to be successful and it is claiming a sale over a million Canvas HD smartphones.

This again proves that single point agenda of attention on the market leader with a fierce focus on product benefits, better value proposition with a low price is a one strategy that pays – always.
Posted by Dr. M. Anil Ramesh at 1:58 PM