Super success story of the Sachin Digigraph campaign by BCCI. 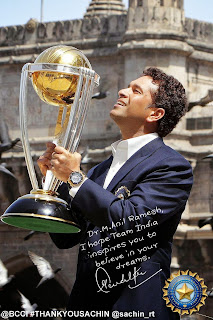 Sachin Tendulkar the great Indian Cricketer has retired. He has left a quarter century of fond memories. His retirement swept India into a wave of sadness and nostalgia.

BCCI (Board of Control of Cricket in India) came out with a very innovative plan to bid  Sachin a fond farewell. It joined hands with Digigraph.me and Twitter to launch the “Thank you Sachin Campaign”. It was a very simple campaign (come to think of it, it is always the simplest of things that produce the most dramatic results). Fans of Sachin have to simply send a message saying “ThankYou Sachin” from their Twitter handle and they would instantaneously receive a Digigraph from Sachin Tendulkar. A Digigraph is a Digital Autograph. The Digital  autograph image of Sachin would contain the name of the recipient and would have a personal message from Sachin himself.

This campaign proved to be a super success. The cricket crazy fans of Sachin lapped up the offer. In all 35 digigraphs were on offer and many enthusiasts started collecting all the 35 digigraphs of the master blaster. Yes it is true that the digigraphs are digital have no intrinsic value but might become valuable in let’s say in thirty years’ time!

To ensure that this social media exercise grabs maximum eyeballs, Twitter had send out mails to users informing them of the end of the activity today. “Own a piece of history,” the mail reads. “Tweet to get a personalized photo from Sachin!”

Post Tendulkar’s final match, Rishi Jaitly for Twitter India announced that the campaign had generated a whopping 3 million tweets and counting. The digigraph themselves had been viewed 4 million times. Most importantly, a thank you message came from Tendulkar himself, acknowledging the campaign becoming the most retweeted tweet in India, with the current counter standing at 16,888 RTs and 11,389 favourites.

Great Campaign BCCI, Twitter and Digigraph. Suddenly Twitter is in big news. Many like me were very weary of this very intrusive media. But this campaign forced me on board and I am told many like me opened twitter accounts just to get their “Piece of History”.

A  lesson to the Indian corporates who have had or still are using Sachin as a brand ambassador. Why is that they did not do similar activities like BCCI? After all BCCI is registered as a nonprofit making organization! It was sad to see that no newspaper (of the ones that I bought) had a special section on Sachin except Eenadu (a telugu dally), the day after Sachin finally retired. It was not that they were caught napping. The match ended at 1130 hours on Saturday and they had a lead time of nearly 12 hours. No wonder the print media is taking a beating from the Electronic media.

The corporates also missed a chance in tieing up with history. Why can’t Boost – the energy Drink, a long time sponsor of Sachin give away autographed bats of Sachin. This would generate enormous amount of good will and would increase the sale too. And why not.  It is payback time. The corporates who made money and increased their market share have to give something back to the fans who finally are responsible for the success of any brand and products.

Some things to chew upon, Corporate India!
.