Which is the real Hustler? 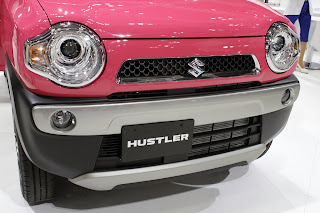 Suzuki Motor Corp no idea that the name "Hustler" for its new, boxy mini-car aimed at outdoorsy Japanese customers may cause confusion among English speakers for its association with an adult magazine.

Taking words from foreign dictionaries without checking how they might be received by native speakers has produced countless products with unintentionally unsavory names.

The name Hustler was chosen by Suzuki to conjure the image of agility, as well as invite nostalgia from customers who remembered an off-road motorbike released in 1969 called the Hustler 250.

The Hustler follows a string of other Japan-made cars to confuse speakers of foreign languages, such as Daihatsu Motor Co Ltd's Naked in 2000 and Isuzu Motors Ltd's 1983 Bighorn. Similarly a car named Nova created lot of confusion in Latin American countries as Nova means no go in Spanish.

Spanish speakers were taken aback by Mazda Motor Corp's Laputa, a derogatory word for sex worker, while Mitsubishi Motors Corp sold its Pajero model as the Montero in Spanish-speaking countries as the former is slang for sexual self-pleasure.

While many brand names around the world don't translate across borders - the Iranian washing powder Barf, which means snow in Persian, or a Swedish chocolate bar called Plopp, are very uncomfortable names. So are names like Pantene and Puck which sound dangerously like ladies undergarments and vomit. Many companies often use foreign words for how they sound, with little regard to their original meaning.

This is partly due to foreign words having an exotic ring, much like how Chinese characters are seen by Westerners as poetic or profound choices for tattoos even if the results don't make much sense to native speakers. But many firms often fail to check if a name 'travels' because of historical reasons, marketers say.