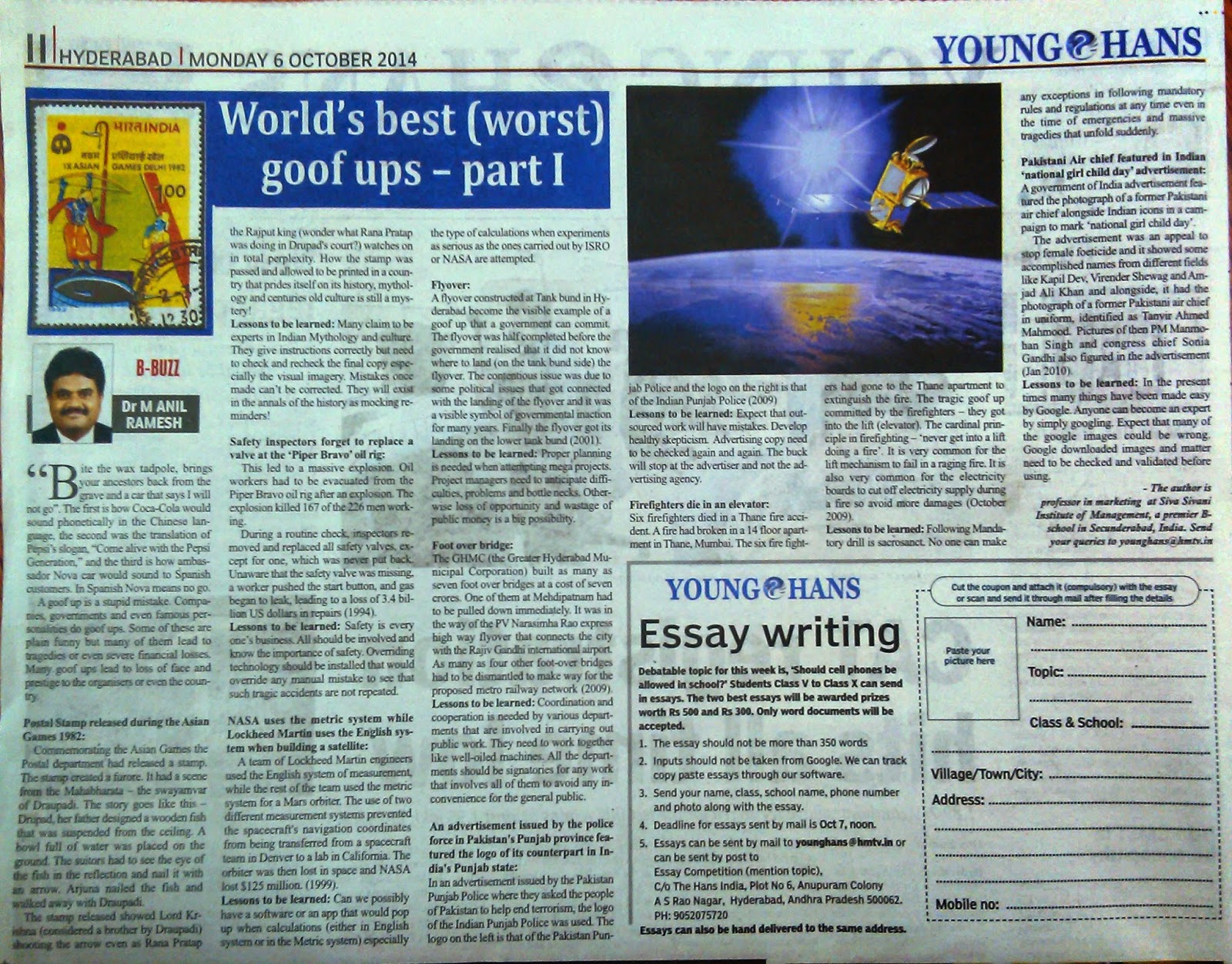 E-Version of the article

inShare
“Bite the wax tadpole, brings your ancestors back from the grave and a car that says I will not go”. The first is how Coca-Cola would sound phonetically in the Chinese language, the second was the translation of Pepsi’s slogan, “Come alive with the Pepsi Generation,” and the third is how ambassador Nova car would sound to Spanish customers. In Spanish Nova means no go.

A goof up is a stupid mistake. Companies, governments and even famous personalities do goof ups. Some of these are plain funny but many of them lead to tragedies or even severe financial losses.  Many goof ups lead to loss of face and prestige to the organisers or even the country.

Commemorating the Asian Games the Postal department had released a stamp. The stamp created a furore. It had a scene from the Mahabharata – the swayamvar of Draupadi. The story goes like this – Drupad, her father designed a wooden fish that was suspended from the ceiling. A bowl full of water was placed on the ground. The suitors had to see the eye of the fish in the reflection and nail it with an arrow. Arjuna nailed the fish and walked away with Draupadi.

The stamp released showed Lord Krishna (considered a brother by Draupadi) shooting the arrow even as Rana Pratap the Rajput king (wonder what Rana Pratap was doing in Drupad's court?) watches on in total perplexity. How the stamp was passed and allowed to be printed in a country that prides itself on its history, mythology and centuries old culture is still a mystery!

Lessons to be learned: Many claim to be experts in Indian Mythology and culture. They give instructions correctly but need to check and recheck the final copy especially the visual imagery. Mistakes once made can’t be corrected. They will exist in the annals of the history as mocking reminders!

Safety inspectors forget to replace a valve at the ‘Piper Bravo’ oil rig:

This led to a massive explosion. Oil workers had to be evacuated from the Piper Bravo oil rig after an explosion. The explosion killed 167 of the 226 men working.

During a routine check, inspectors removed and replaced all safety valves, except for one, which was never put back. Unaware that the safety valve was missing, a worker pushed the start button, and gas began to leak, leading to a loss of 3.4 billion US dollars in repairs (1994).

Lessons to be learned: Safety is every one’s business. All should be involved and know the importance of safety. Overriding technology should be installed that would override any manual mistake to see that such tragic accidents are not repeated.

NASA uses the metric system while Lockheed Martin uses the English system when building a satellite:

A team of Lockheed Martin engineers used the English system of measurement, while the rest of the team used the metric system for a Mars orbiter. The use of two different measurement systems prevented the spacecraft's navigation coordinates from being transferred from a spacecraft team in Denver to a lab in California. The orbiter was then lost in space and NASA lost $125 million. (1999).

Lessons to be learned: Can we possibly have a software or an app that would pop up when calculations (either in English system or in the Metric system) especially the type of calculations when experiments as serious as the ones carried out by ISRO or NASA are attempted.

A flyover constructed at Tank bund in Hyderabad become the visible example of a goof up that a government can commit. The flyover was half completed before the government realised that it did not know where to land (on the tank bund side) the flyover. The contentious issue was due to some political issues that got connected with the landing of the flyover and it was a visible symbol of governmental inaction for many years. Finally the flyover got its landing on the lower tank bund (2001).

Lessons to be learned: Proper planning is needed when attempting mega projects. Project managers need to anticipate difficulties, problems and bottle necks. Otherwise loss of opportunity and wastage of public money is a big possibility.

The GHMC (the Greater Hyderabad Municipal Corporation) built as many as seven foot over bridges at a cost of seven crores. One of them at Mehdipatnam had to be pulled down immediately. It was in the way of the PV Narasimha Rao express high way flyover that connects the city with the Rajiv Gandhi international airport.  As many as four other foot-over bridges had to be dismantled to make way for the proposed metro railway network (2009).

Lessons to be learned: Coordination and cooperation is needed by various departments that are involved in carrying out public work. They need to work together like well-oiled machines. All the departments should be signatories for any work that involves all of them to avoid any inconvenience for the general public.

An advertisement issued by the police force in Pakistan's Punjab province featured the logo of its counterpart in India's Punjab state:

Lessons to be learned: Expect that outsourced work will have mistakes. Develop healthy skepticism.  Advertising copy need to be checked again and again. The buck will stop at the advertiser and not the advertising agency.

Firefighters die in an elevator:

Six firefighters died in a Thane fire accident. A fire had broken in a 14 floor apartment in Thane, Mumbai. The six fire fighters had gone to the Thane apartment to extinguish the fire. The tragic goof up committed by the firefighters – they got into the lift (elevator). The cardinal principle in firefighting – ‘never get into a lift doing a fire’. It is very common for the lift mechanism to fail in a raging fire. It is also very common for the electricity boards to cut off electricity supply during a fire so avoid more damages (October 2009).

Lessons to be learned: Following Mandatory drill is sacrosanct. No one can make any exceptions in following mandatory rules and regulations at any time even in the time of emergencies and massive tragedies that unfold suddenly.

The advertisement was an appeal to stop female foeticide and it showed some accomplished names from different fields like Kapil Dev, Virender Shewag and Amjad Ali Khan and alongside, it had the photograph of a former Pakistani air chief in uniform, identified as Tanvir Ahmed Mahmood.  Pictures of then PM Manmohan Singh and congress chief Sonia Gandhi also figured in the advertisement (Jan 2010).

Lessons to be learned: In the present times many things have been made easy by Google. Anyone can become an expert by simply googling. Expect that many of the google images could be wrong. Google downloaded images and matter need to be checked and validated before using.