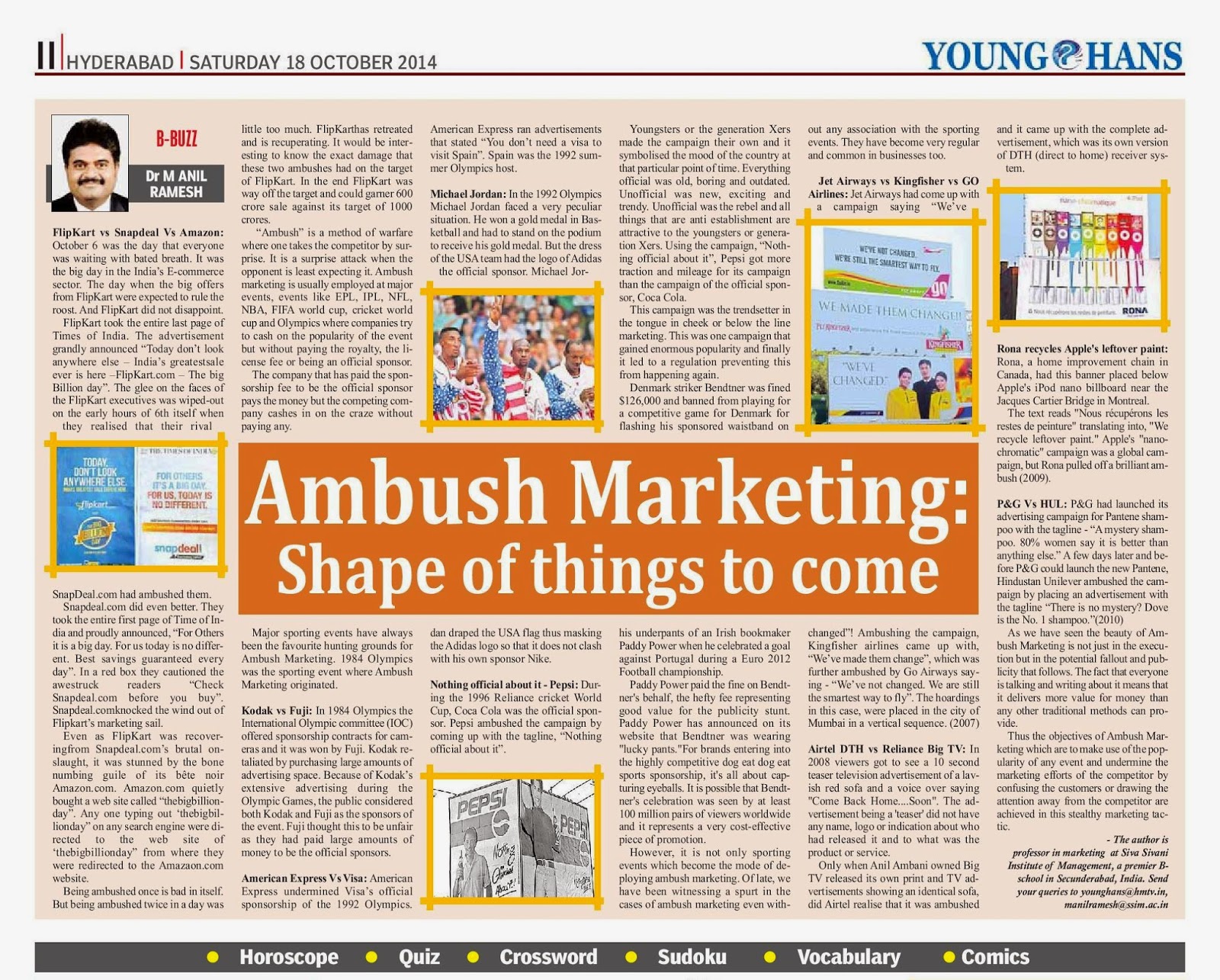 FlipKart vs Snapdeal Vs Amazon:  October 6th was the day that everyone was waiting with bated breath. It was the big day in the India’s E-commerce sector. The day when the big offers from FlipKart were expected to rule the roost. And FlipKart did not disappoint.

FlipKart took the entire last page of Times of India. The advertisement grandly announced “Today don’t look anywhere else – India’s greatest sale ever is here – FlipKart.com – The big Billion day”. The glee on the faces of the FlipKart executives was wiped-out on the early hours of 6th itself when they realized that their rival SnapDeal.com had ambushed them.

Snapdeal.com did even better. They took the entire first page of Time of India and proudly announced “For Others it is a big day. For us today is no different. Best savings guaranteed every day”. In a red box they cautioned the awestruck readers “Check Snapdeal.com before you buy”. Snapdeal.com knocked the wind out of Flipkart’s marketing sail.

Being ambushed once is bad in itself. But being ambushed twice in a day was little too much. FlipKart has retreated and is recuperating. It would be Interesting to know the exact damage that these two ambushes had on the target of FlipKart. In the end FlipKart was way off the target and could garner 600 crore sale against its target of 1000 crores.

“Ambush” is a method of warfare where one takes the competitor by surprise. It is a surprise attack when the opponent is least expecting it.  Ambush marketing is usually employed at major events, events like EPL, IPL, NFL, NBA, FIFA world cup, cricket world cup and Olympics where companies try to cash on the popularity of the event but without paying the royalty, the license fee or being an official sponsor.

The company that has paid the sponsorship fee to be the official sponsor pays the money but the competing company cashes in on the craze without paying any.

Kodak vs Fuji: In 1984 Olympics the International Olympic committee (IOC) offered sponsorship contracts for cameras and it was won by Fuji. Kodak retaliated by purchasing large amounts of advertising space. Because of Kodak’s extensive advertising during the Olympic Games, the public considered both Kodak and Fuji as the sponsors of the event. Fuji thought this to be unfair as they had paid large amounts of money to be the official sponsors.

Michael Jordan: In the 1992 Olympics Michael Jordan faced a very peculiar situation. He won a gold medal in Basketball and had to stand on the podium to receive his gold medal. But the dress of the USA team had the logo of Adidas the official sponsor. Michael Jordan draped the USA flag thus masking the Adidas logo so that it does not clash with his own sponsor Nike.

This campaign was the trendsetter in the tongue in cheek or below the line marketing. This was one campaign that gained enormous popularity and finally it led to a regulation preventing this from happening again.

Denmark striker Bendtner was fined $126,000 and banned from playing for a competitive game for Denmark for flashing his sponsored waistband on his underpants of an Irish bookmaker Paddy Power when he celebrated a goal against Portugal during a Euro 2012 Football championship.

Paddy Power paid the fine on Bendtner's behalf, the hefty fee representing good value for the publicity stunt. Paddy Power has announced on its website that Bendtner was wearing "lucky pants." For brands entering into the highly competitive dog eat dog eat sports sponsorship, it's all about capturing eyeballs. It is possible that Bendtner's celebration was seen by at least 100 million pairs of viewers worldwide and it represents a very cost-effective piece of promotion.

Jet Airways vs Kingfisher vs GO Airlines: Jet Airways had come up with a campaign saying “We’ve changed”! Ambushing the campaign, Kingfisher airlines came up with “We’ve made them change” which was further ambushed by Go Airways saying “We’ve not changed. We are still the smartest way to fly”. The hoardings in this case, were placed in the city of Mumbai in a vertical sequence. (2007)

Airtel DTH vs Reliance Big TV: In 2008 viewers got to see a 10 second teaser television advertisement of a lavish red sofa and a voice over saying "Come Back Home....Soon". The advertisement being a 'teaser' did not have any name, logo or indication about who had released it and to what was the product or service.

Only when Anil Ambani owned Big TV released its own print and TV advertisements showing an identical sofa, did Airtel realize that it was ambushed and it came up with the complete advertisement, which was its own version of DTH (direct to home) receiver system.

P&G Vs HUL: P&G had launched its advertising campaign for Pantene shampoo with the tagline “A mystery shampoo. 80% women say it is better than anything else.” A few days later and before P&G could launch the new Pantene, Hindustan Unilever ambushed the campaign by placing an advertisement with the tagline “There is no mystery? Dove is the No. 1 shampoo.” (2010).

As we have seen the beauty of Ambush Marketing is not just in the execution but in the potential fallout and publicity that follows. The fact that everyone is talking and writing about it means that it delivers more value for money than any other traditional methods can provide.
Thus the objectives of Ambush Marketing which are to make use of the popularity of any event and undermine the marketing efforts of the competitor by confusing the customers or drawing the attention away from the competitor are achieved in this stealthy marketing tactic.