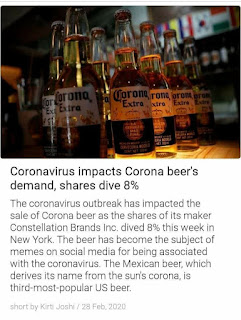 Most of my students of management, especially marketing students, think that mistakes committed by companies should not be committed in the first place.

They conclude saying "these are such basic decisions, why could they not have anticipated such an event". They seem to think everything is orderly and clockwork-like precision watches. What they fail to understand is that the business world is dynamic and fraught with uncertainty.

This Mexican brand of beer could not have even imagined in its wildest dreams that a deadly virus would be named after its famous brand - Corona. And the result, the stock nosedived by 8%. Whom does the company blame, nobody but its fate? That is why Business education is still called Masters of business administration. It is an art and not a science.

A similar fate was forced on Tata motors when it withdrew the name of its car named Zica which was exactly a virus-like Corona that led to many deaths in the year 2016.

Tata was forced to rename its car as Tiago. The loss that Tata would have incurred - many crores, opportunity cost and wasted time, effort and money in brand building the name - Zica.