Freebie marketing - where free is not really free. 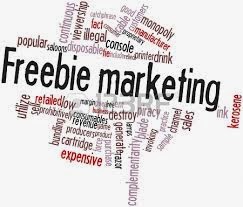 Freebie marketing, also known as the razor and blades business model, is a model wherein one item is sold at a low price (or given away for free) in order to increase sales of a complementary good such as supplies (inkjet printers and ink cartridges, mobile phones and service contracts) or game consoles (accessories and software). It is distinct from Loss leader Marketing and Free sample marketing, which do not depend on complementarity of products or services.

The usual story is about Gillette is that he realized that a disposable razor blade would not only be convenient, but also generate a continuous revenue stream. To foster that stream, he sold razors at an artificially low price to create the market for the blades.

But in fact Gillette razors were expensive when they were first introduced, and the price only went down after his patents expired: it was his competitors who invented the razors-and-blades model.

Freebie marketing has been used in business models for many years. The Gillette company still uses this approach, often sending disposable safety razors in the mail to young men near their 18th birthday, packaging them as giveaways at public events that Gillette has sponsored.

Comcast often gives away DVRs to its subscribing customers. However, the cost of giving away each free DVR is offset by a $19.95 installation fee as well as a $13.95 monthly subscription fee to use the machine. Based on an average assumed cost of $250 per DVR box to Comcast, after 18 months the loss would balance out and begin to generate a profit.

Computer printer manufacturers have gone through extensive efforts to make sure that their printers are incompatible with lower cost after-market ink cartridges and refilled cartridges. This is because the printers are often sold at or below cost to generate sales of proprietary cartridges which will generate profits for the company over the life of the equipment.

Atari had a similar problem in the 1980s with Atari 2600 games. Atari was initially the only developer and publisher of games for the 2600; it sold the 2600 itself at cost and relied on the games for profit. When several programmers left to found Activision and began publishing cheaper games of comparable quality, Atari was left without a source of profit. Atari added measures to ensure games were from licensed producers only for its later-produced 5200 and 7800 consoles.

In recent times, video game consoles have often been sold at a loss while software and accessory sales are highly profitable to the console manufacturer. For this reason, console manufacturers aggressively protect their profit margin against piracy by pursuing legal action against carriers of modchips and jailbreaks.

Many marketers make extensive use of the freebie marketing business model, as many products are promoted as having a "free" trial, that entice consumers to sample the product and pay only for shipping and handling. Advertisers of heavily-promoted products such as weight reducing Products targeting dieters hope the consumer will continue paying for continuous shipments of the product at inflated prices, and this business model has been met with much success.

Websites specializing in sampling and discounts have proven to be very popular with economy-minded consumers, who visit sites which utilize freebies as link bait.

Tying is a variation of freebie marketing that is often illegal when the products are not naturally related (for example, requiring a bookstore to stock up on an unpopular title before allowing them to purchase a bestseller). Tying is also known in some markets as 'Third Line Forcing.

Some kinds of tying, especially by contract have historically been regarded as anti-competitive practices. The basic idea is that consumers are harmed by being forced to buy an undesired good (the tied good) to purchase a good they actually want (the tying good), and so would prefer that the goods be sold separately.

Another common example is how cable and satellite TV providers contract with content producers. The production company pays to produce 25 channels and forces the cable provider to pay for 10 low-audience channels to get a popular channel. Since cable providers lose customers without the popular channel, they are forced to purchase many other channels even if they have a very small viewing audience.
Posted by Dr. M. Anil Ramesh at 3:27 PM