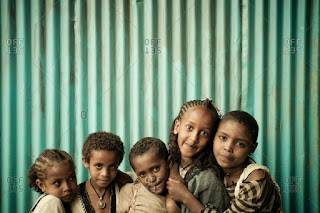 The next day dawned bright and we got up to loud banging that jolted us from our sleepy slumber. The banging was coming from the front yard gate. I opened the main door and was bowled over by what I saw! Two impish eyes and one very cute nose and a grinning smile peeping from under the space of the gate itself. I flung open the front gate and was stunned by the charade.

There was a crowd of nearly four or five kids all trying their best to get inside the house of the firanj! The head girl, the leader may be all of 5 -6 years, held out her right hand. In her hand was one of the cutest article I have ever seen. It was a container made of bottle gourd. She mimicked the action of milking a cow.

Then it struck me, the enterprising local milk man had send me home delivery of fresh cow milk! I took the delivery of the cow milk taking care to ensure that the herd (of children)  does not over run our new house.

Ethiopia is a totally cow country and there were no buffaloes. It was quite tough initially to drink tea or coffee with cow milk. Cow milk has a different colour and texture and a slight smell. The curd too had a sticky feel and did not set into nice chunks like the curd made from Buffalo milk. And yes like in many countries, Ethiopians do not consume either curd or buttermilk. The cold climate made the setting of curd, a culinary challenge in itself. 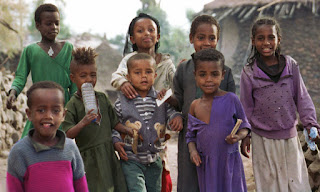 Even after shutting the front main door, we could hear the children giggling and whispering for a long time. It was daily chore for almost 15 to 20 days before they gave up. They thought it was very unsporting of the firanj not to allow them a free run of the front yard.

It was a Saturday and a holiday. I took a leisurely walk along with Sahithi in our new colony, Kable 7. Three houses away, I ran into my PEDA colleague, an Ethiopian English faculty. He gave me a wide grin and said “Good morning Dr. Aneel”. I wished him too.

“So, How was your first night in Kable 7?” he enquired. “fine, fine” I assured him “but the noises in the night were disturbing” “Noises!” His eyebrows shot up and almost touched his fore head “what noises?”

I explained the noises to him. He was silent for few seconds. Then he gave out a loud shout “DR.ANEEL. You are totally mistaken. Let me assure you, that Kable 7 is very safe and there are no ghosts or spirits that dislike foreigners or people writing in the night. I am sure that the noises were caused by tom cats settling their arguments over queens (female cats) the only way they know, with their claws and curses. 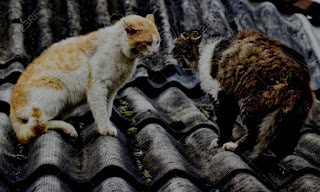 I am sure that the local monkeys would also have participated in the argument and added to the racket. As the roof was made of tin the sound would have been muffled”. “Spirits” he roared with laughter “The only spirits that most Ethiopians love is Tella (a locally brewed drink like our kallu) and Dashen Beer” he added with an all-knowing grin on his face.