Teaching in Ethiopia was a new experience. From a cocooned School of Management Studies, CBIT India, I was thrown into the deep end of an ocean of education – Bahirdar University. It was a university so big that teachers travelled by bicycles to go from one block to another. And in 2002, if a person was not in his seat it was very difficult to trace him/her as there were no dog chains (oops Cellphones) around the necks!

The University was lush green and there was lot of wildlife to be seen. It was very common to see white Colobus monkey called mountain Guereza. One of which was a frequent visitor, to one of my classes. This enormous monkey would perch himself on the window sill and would take in all that was taught! 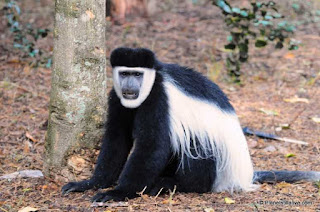 He would sometimes munch on some leaves and just look like an absent minded student pondering on a problem for which the solution could not be found. He had a permanent perplexed expression on his face! Once the class was over, he would gracefully jump into the foliage of the tree and disappear. Sadly with the expansion of the university such memorable sightings were lost by the time I left in 2006.

All the teachers had to offer a course. Frequently students would come up in the market, introduce themselves and say “sir, you offered us a course in Introduction to Management and so on”. All teachers had to prepare a course outline which corresponds to an Indian syllabus sheet. This prepared course outline, had to be approved by the Dean and the HOD, cyclostyled and then circulated among the students.

I had also noticed that many teachers were giving one or two page handouts, which the students gratefully accepted. A visit to the library confirmed my thought process. There was very limited availability of books and even those books were quite outdated.

Within a month I hit upon an idea. I started making quite elaborate notes in each chapter and got them cyclostyled. I would offer these notes to my students who were delighted to get printed reading material. I had an ace up my sleeve. I was cyclostyling 25 sets more than my students’ strength.

This notes built up into a very nice reading material and in no time the semester was over. I had a cover page made, clubbed it with the study material and got it nicely bound and presented the entire set to the delighted librarian. Sometime later, I was called into the Vice President‘s office (Vice President is like our Vice Chancellor).

I was not very overtly worried as I was getting good feedback from all my students. But some lingering doubt remained – “why was I called in?” I was ushered in and the VP said without any preamble “I was told that you are giving study material to the library, whose idea is this?” “Mine” I said “Any problem sir?” “no, no” he assured me “No problem at all, it is a great initiative. During my visit I found many students referring your notes. How much did it cost you to make the 25 sets of reading material?”

“Not much sir” I told him “I must have paid around 100-125 birr for the binding”. The VP was beaming “I am very happy that you are taking so much effort to educate my students. From now on you don’t have to worry, get them bound in the university press and I will see that you are not charged anything”. I thanked him and left.

By the time I finished two contracts I had contributed 16 sets of different reading material to the library. I had taught sixteen different subjects in four years and thoroughly enjoyed teaching each of them. Even though I taught many subjects, in hearts of hearts I loved teaching Introduction to Marketing, Sales and Distribution, Marketing Research and Strategic Management. My Ethiopian students still remember me as a ‘Marketing teacher’.
Posted by Dr. M. Anil Ramesh at 7:03 PM