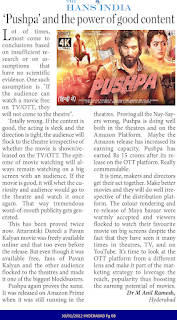 Lots of time most come to conclusions based on insufficient research or on assumptions that have no scientific evidence. One such assumption is "If the audience can watch a movie free on TV/OTT, they will not come to the theatre".

Totally wrong. If the content is good, the acting is sleek and the direction is tight, the audience will flock to the theatre irrespective of whether the movie is shown/released on the TV/OTT. The epitome of movie watching will always remain watching on a big screen with an audience. If the movie is good, it will whet the curiosity and audience would go to the theatre and watch it once again. That way tremendous word-of-mouth publicity gets generated.

This has been proved twice now. Attarintiki Daredi a Pavan Kalyan movie was freely available online and that too even before the release. But even though it was available free, fans of Pavan Kalyan and the other audience flocked to the theatres and made it one of the biggest blockbusters.

Pushpa again proves the same. It was released on Amazon Prime when it was still running in the theatres.  Proving all the Nay-Sayers wrong, Pushpa is doing well both in the theatres and on the Amazon Platform.  Maybe the Amazon release has increased its earning capacity. Pushpa has earned Rs 15 crores after its release on the OTT platform. Really commendable.

It is time, makers and directors get their act together. Make better movies and they will do well irrespective of the distribution platform. The colour rendering and re-release of Maya bazaar were warmly accepted and viewers flocked to watch their favourite movie on big screens despite the fact that they have seen it many times in theatres, TV, and on YouTube. Time to look at the OTT platform from a different lens and make it part of the marketing strategy to leverage the reach, popularity thus boosting the earning potential of movies.