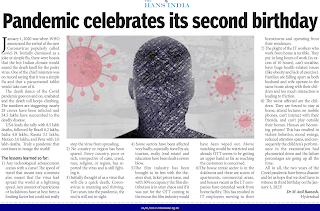 1st January 2020 was when WHO announced the arrival of the new Corona Virus popularly called Covid 19. Initially dismissed as a joke or simple flu, there were boasts that the hot Indian climate would sound the death knell for the perky virus. One of the chief ministers said (on record) that it was a simple flu and that paracetamol would take care of it.

But the death dance of the Covid pandemic goes on and on, unabated and the death toll keeps climbing. The numbers are staggering: nearly 29 crores have been infected and 54.5 lakhs have succumbed to the deadly disease.

USA leads the tally with 8.5 lakhs deaths, followed by Brazil 6.2 lakhs, India 4.8 lakhs and Russia 3.1 lakh, Mexico 3,0 lakhs and Peru with 2.0 lakh deaths are the other countries with more than 2,00,000 deaths.  Truly a pandemic that ravaged the world!

The lessons learned so far:

1)      Any technological advancement comes with a curse! The speed of travel that meant easy commute also meant that the virus had spread the world at a lightning spread. Any amount of restrictions or lockdowns have at best a limiting factor but could not really stop the virus from spreading.

2)      No country or region has been spared. Every country, poor or rich, irrespective of caste, creed, race, religion, or region, has reported the virus and is still fighting it.

3)   Initially thought of as a virus that will die a quick death, Coronavirus is mutating and thriving. Two years into the pandemic the end is still not in sight.

4)      Some sectors have been affected very badly especially travel, tourism, air travel, realty (real estate) and education have been dealt a severe blow.

5)   Film industry has been brought to its feet and with the theaters shut, ticket prices issue, and with 50% occupancy the film distribution is in utter chaos and if it was not for the OTT coming to the rescue the film industry would have been wiped out. Movie watching would be restricted and already OTT seems to be getting an upper hand as far as reaching the customers is concerned.

6)      The house rental sector is in the doldrums and there are scores of apartments, commercial areas, and houses vacant as the I.T companies have extended work from home facility. This has resulted in IT employees moving to their hometowns and operating from their residences.

7)      The plight of the IT workers who work from home is terrible. They put in long hours of work (in excess of 10 hours), can’t socialize, have huge health-related issues (like obesity and lack of exercise). Families are falling apart as both husband and wife operate in the same house along with their children and too much interaction is leading to friction.

8)      The worst affected are the children. They are forced to stay at home, attend lectures on mobile phones, can’t interact with their friends, and can’t play outside their homes. Houses are becoming prisons! This has resulted in violent behavior, mood swings, reduced attention spans, and consequently the children’s performance in the examination had plummeted down and the failure percentages are going up all the time.

All in all, the two years of the Covid pandemic have been a disaster, and let us hope that we don’t have to witness its 3rd Birthday on the 1st of January 2023!