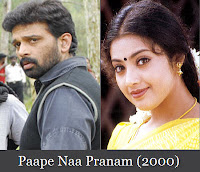 3. Name less movie:  A Telugu movie tried the unthinkable. It was a movie without a name. In a movie industry where a name is everything this movie went to the town saying that it has no title. The producers claimed that the viewer could name the movies after watching it in the theatres. It was a very brilliant concept but the movie was not great. Finally the movie was named Paape na Pranam (My daughter is my breath). The movie sunk without a trace.
JD chakravarthy the hero and producer was of the opinion that nameless movie will arouse the curiosity in the audience and that they will come to the theatres and according to him it worked, until they named the movie. The co-producer wanted to release in B and C centers (In India that would mean small towns and rural areas) and he felt that audience won't accept the movie without a title and opted for this title. That effectively took out the USP of the movie which was not having a title. A brilliant marketing coup laid waste by a back peddling co producer. 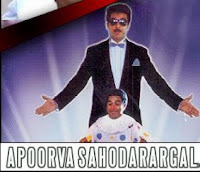 4. Apoorva Sahodharargal  is a 1989 Tamil feature film directed by Singeetham Srinivasa Rao. The film had Kamal Hassan in triple roles, as a mechanic, a circus clown who is a dwarf and a police officer.  Due to its mega success in the south, the film was dubbed into Hindi as Appu Raja.
The make-up for Kamal Hassan as a dwarf in ‘Apoorva Sahodarulu’ has floored the people and they have no clue as to how he could make it even several years after the film is released.
But, the film’s director Singeetam Srinivasa Rao not only revealed the secret but also felt that an interactive session with members of a film society and others was the right venue and best occasion to do so.
At the session organized by the Vizag Film Society, Mr. Srinivasa Rao said that the credit goes to Mr. Kamal Hassan, who worked very hard for the role, photography director P.C. Sriram and a set boy who is called by his nickname ‘Japan’. Readers who are interested to know  how it was done Can read it at http://www.facebook.com/topic.php?uid=2260003629&topic=4865 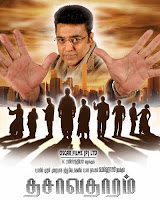 5. Dasavathaaram is a 2008 Tamil film co-written and directed by K. S. Ravikumar. Kamal Haasan, who wrote the screenplay and story of the film, stars in ten distinct roles, including the lead character. The film, which had been under production for nearly three years, was produced and distributed by Venu Ravichandran, who made the film with a budget of 60 crores.
Kamal Haasan was keen to break the record for an actor appearing in the most roles, so he came up with an original storyline and got it directed by K. S. Ravikumar.
Kamal Haasan played 10 roles at a time making it the first time that an actor has appeared in so many roles in world cinema (this record was later broken in 2009 by Priyanka Chopra who played 12 roles in What's Your Raashee?).
Posted by Dr. M. Anil Ramesh at 12:07 AM