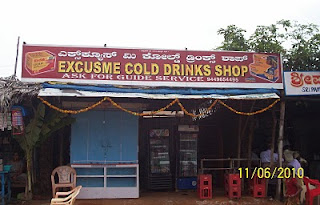 Hyderabad is a city where predominantly Telugu and Urdu are mostly spoken but strangely there is a fascination for using English. This leads to many funny situations. Some of them are listed.
An apartment block had a tenth pass watchman. The apartment block was being harassed by unwanted salesmen. The apartment owners asked the English educated watchman to put up a notice. He put up a notice “No Sales, Men allowed”.  He was severely reprimanded and finally he corrected the sign as “Salesmen not allowed”. A disgruntled Salesman rubbed some of the letters off selectively to make the sign read “Salesmen loved”
Most hospitals have many sisters (nurses as they are popularly called in India). They sometimes fill up the preliminary case sheet. One sister made this report “Patient has one small son at home. So she wants to remove her stomach”. On enquiry the real story come out. The patient had a small baby at home. She was pregnant and wanted to abort the baby as she feared that she could not manage two kids. She wanted an abortion. An abortion was reported as removing of stomach aka stomach stapling a completely different procedure for a completely different ailment.
Another sister made out this gem” Patient complaining of pain. Wants an abortion. Mother-in-law can’t see”. The doctor asked the nurse “I can understand the patient’s problem. But why don’t we refer the Mother-in-law to an Ophthalmologist?” The nurse sheepishly answered “Nahi doctor madam, the mother-in-law can’t bear seeing the pain of her daughter-in-law. There is nothing wrong with her eyes”
A small sugar cane juice seller put up a sign. Amitabh – 5 rupees and Jaya Bhaduri – Rs 2.50. What he meant was big glass – 5 rupees and small glass – Rs 2.50. For the uninitiated Amitabh Bachaan the superstar of India is very tall and his wife Jaya Bhaduri also an actor – is small and petite.
Small time motor cycle mechanics in Hyderabad would be seen shouting “Areh Chotu bring me the 2-3 panna”. Panna? Panna is the Hyderabadi word for Spanner.
As a child I remember going to a stationery shop and asking for a sharpener. The shop keeper was puzzled. Luckily for me I could spot a sharpener and pointed it out to him. He said “Aare babu woh tho Chakmaar hai – (translated it means – that is a Chakmaar)” and gave me a Hyderabadi sharpener (Chakmaar)
My mother’s friend was taking a new type of medication. My mother enquired “is it Homeopathy that you are taking?” Her friend promptly said “No Hemalatha garu not Homeopathy, I am taking Ompathy” (Ompathy – Oh my god! What a name for Homeopathy).
A newly minted doctor asked for a new sign. What the sign maker gave him almost killed him. The sigh said “Dr So and So The Rapist”. The doctor was a Therapist!
Children in Hyderabad play a hide and seek game where the catcher sings out “Iceboy” when he sees a hidden friend. “Iceboy" is the Hyderabadi equivalent for the game "I saw a boy”.
The common way of talking to each other in Hyderabad would be to say “I say you” and “what say you” This is what the Queen ’s English has become in Hyderabad. (I told you and you told me for the grammatically inclined readers).

One of my BIFAAS student from second shift Mr. Bharat came out with an interesting word of his own. He said that the popular word for eraser was lubber (rubber). Very funny.

Also it is quite common to hear customers shouting out “I need a chilling cold drink” in a hotel. What the customer wants is a chilled cold drink. Chilling is a process and chilled is the end result!

Hyderabad is known for its big mandis (huge whole sale markets). Fruit sellers sell fruits in small hundreds and big hundreds. A small hundred (chinna Vanda) is 96 mangoes like in the case of a hundred page note book and big hundred (peddha Vanda) is 192 mangoes like in the case of a 200 page note book.
Similarly a baker’s dozen is not 12 it is 13. In the by gone era when a customer buys a dozen loaves of bread one loaf of bread is given extra as a bonus. Very confusing.
Many of the TV anchors and experts are seen saying “Both of you all danced very well” – Both of you should be used and not both of you all.
Posted by Dr. M. Anil Ramesh at 12:03 PM