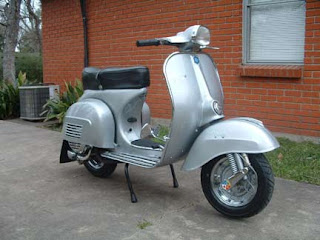 ‘Hamara Bajaj’. Bajaj was the iconic product from the stables of the Bajaj group. So iconic that it was demanded as a part of dowry. There were serpentine queues and a seven year waiting time to get your own Bajaj. Nonresident Indian relatives and friends were badgered for the mandatory US $ 500 dollar remittance that will magically make you get a out of turn allotment of a Bajaj scooter. In short it epitomized everything that was Indian and it was an unbashingly an Indian product. Not very pretty but very sturdy.

So it was with a lump in the throat we watched the pulling the plug of the Bajaj scooter. With the Bajaj scooter went the romance of 3 or 4 entire generations of Indians. Bajaj scooter was the scooter on which you learned to drive. It on a Bajaj scooter you had your first accident!. And it was on a Bajaj that you dropped off or gave a lift to a pretty lass. The pulling of the plug was a very emotional event for the elder Bajaj, Rahul but the younger scion Ravi was quite point blank – it was curtains for the old war horse. In the same vein Ravi Bajaj also said that he was contemplating a complete dropping of the name Bajaj from the Bajaj product line. That is each and every product of Bajaj will be branded separately and they will not carry the name of Bajaj. For example Pulsar itself would become a brand name and it would be promoted as Bajaj Pulsar.

Thus it was great news when all the business newspapers reported today that Bajaj has bitten the bullet. Bajaj did the unthinkable, they stepped into the choppy, dog eat dog world of Indian car industry. The same car industry that has seen many a mighty fall flat on their faces. Bajaj wants to enter the ultra wafer thin margin based extreme low cost car segment dominated earlier by Maruti Suzuki and now by Tata Nano.