Who is the asli (real) Hero – Hero Motocorp or Honda Motorcycle and Scooter India? 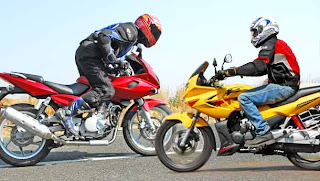 Honda Motorcycle and Scooter India hopes to introduce a low cost bike, possibly the cheapest, in India currently being manufactured in China.  It hopes to sell these 125 cc made in China bikes currently sold in some African markets at around Rs 30,000 (ex-showroom Delhi), almost Rs 4,000 lower than market leader Hero’s CD Dawn and about Rs 18,000 cheaper than the Super Splendor.
Tt remains to be seen how Chinese made bikes by Japanese company will be received by Indians. What a paradox – Japanese are taking the assistance of a Chinese company for an market ascendency in an Indian market. This is globalization for you.
Recently, Honda Motorcycle and Scooter India elbowed out TVS to grab third position in the two-wheeler market. Its next target Bajaj Auto the No 2 two-wheeler company in India.
Honda it is gunning for the budget conscious 100-125 cc bike market, a segment dominated by Hero (although mostly because of Honda’s technology due to the earlier partnership). Sales of 100 cc bikes account for nearly half the Indian motorcycle market.
Honda officials said they are investing more than Rs 1,000 crore over the next year to set up a new factory and increase production capacity to four million units in two years and 10 million units by 2020.
“Our dream is to become the number one motorcycle company in India,” said Keita Muramatsu, president and chief executive officer of Honda Motorcycle and Scooter India, He also added  “Right now, India contributes around 13 percent of our global sales and we want to increase this to 30 percent.”
As a customer I only hope that the customers get benefited from the slugfest. All said and done the latest developments in product design and research and development in two wheeler market are not reaching the Indian customers. It has been new wine in old bottle as far as new product launches have been concerned. Only cosmetic changes - like appearance and brand names have been attempted. Maestro looks like Activa. Whether it is Hero or Honda they need to remember one thing. Customer is the king. Give him the best and he will lavish you with love and he/she will become a fan and a patron for a life time.
Posted by Dr. M. Anil Ramesh at 4:42 PM