Will RE 60 do the trick for Bajaj? 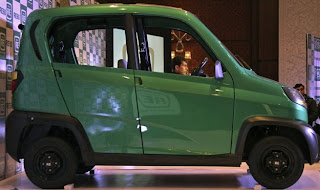 Interestingly at the first look RE 60 is a disappointment. It does not have great looks but the pedigree of the group is impeccable. Ravi says that RE 60 it is for the three wheeler segment buyers. I am confused. Is Ravi saying that it is for three wheeler auto drivers? Or is it a replacement for the three wheeler? If so what about the costing? A three wheeler (LPG version) costs Rs 2,25,000/- in India. The rumors are that Bajaj RE 60 might cost between Rs 1,25,000/- and Rs 1,85,000/-. That would mean that RE 60 would be cheaper than the three wheeler auto rickshaw. That would make things very interesting. Would the existing three wheeler auto drivers shift their loyalty?
The second point is the car itself. Bajaj RE weighs in at 400 kgs and is powered by a 200 CC engine. Would it have controls like that of a three wheeler auto? With a top speed of 70 kms/hour would it be liked by the two wheeler segment who might think of it as a first car buy?
The one point where the RE 60 could score well is the killer mileage that is being promised – a whopping 45 Kms/litre. Even if it gives 35 to 40 Kms/litre on road it would be a great value for money for three wheeler auto drivers and for inflation affected middle and lower middle class Indians.
Finally if the looks are improved, If auto transmission is given (targeting the women, the elderly, the youth below 18 years) if  it were made nippier and if it is positioned correctly it might become a winner that would make the brand consultant of Bajaj - Mr. Jack Trout very proud. Otherwise it will have the same fate of TATA Nano. A confused positioning . What TATA Nano and Bajaj RE 60 needs is clear positioning. No one wants to buy a cheap car. But yes people might buy a no nonsense easy to operate and easy to drive, high mileage delivering car. Let raise a toast to Bajaj team. God speed and all the best.
Posted by Dr. M. Anil Ramesh at 3:49 PM