Axed, the end of innocence!

Viewers, eye advertisements sceptically. Advertisements are full of exaggerations. One advertisement guru said succulently, “We are always heroes in our own stories”. The positives get glorified and the negatives get swept under the carpet using what else, a Eureka Forbes vacuum cleaner.

What would our mothers do when we soiled our crisp white as white can be, virgin clothes; beat us black and blue to the inch of our lives. They would be breathing fire and destroying anything that comes their way. They would be a tornado, and a tsunami rolled into one.

But what happens in our advertisements? When the child comes home with dirty clothes, his mother coos, giggles and says with a bright (Colgate) smile, “Daag Accha hai (stain is good)” she looks happy as if her son has just bagged the first rank in IIT examination.

My friend’s wife who sits beside him and suffers the barrage of advertisements, sarcastically commented, “Why not, she gets paid a bomb for saying all that non-sense. Give me that much money, and I will wash all the mohalla’s (neighbourhood) clothes without a murmur”.

Advertisements leave an indelible impression in the minds of the children who can’t distinguish fact from fiction. My friend Murthy remembered an incident when his son was in seventh grade. He was indulging in a conspiratory conversation with his mother. His mother gave an all-knowing smile, and some money changed hands.

Murthy did not make much of it. But the next day or two his son would go out triumphant like a king and return in the evening miserable and down in the dumps. Curiosity aroused to the point of no return, Murthy confronted his wife and asked, “What is happening? Why is he (his son) behaving in this strange fashion?”.

“I will tell you later”, whispered his wife throwing glances hither and thither. It was a scene out of a James Bond movie. Murthy almost expected her to snap, “Classified information mister. Only on a need to know basis”.

Later in the night, she unravelled the mystery to Murthy. She was at her best, “The cat who had all the cream look’ plastered on her face, “He (our son) is approaching puberty. He wanted to test his masculine charm. The test failed” It was as if the number eleven batsman had hit the fastest bowler in the world for six sixes, in an over!

“What masculine charm? What testing?” Murthy was clutching at straws. Throwing a pitiful glance, his wife explained, speaking slowly as if she was addressing an overgrown imbecile, “He saw the advertisement of AXE perfume and tested it. THAT’S ALL”. The imbecile said, “Je ne Comprends pas” (I don’t understand in French).

“Don’t throw your pathetic French at me”, she snapped, “You claim yourself to be a marketing professional. Don’t you remember the iconic AXE perfume advertisement?” 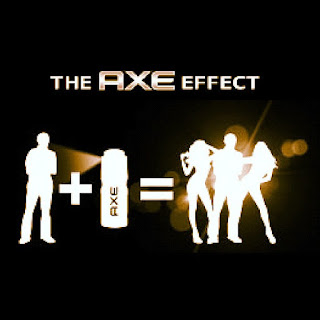 Wisdom dawned on Murthy. The advertisement that she is talking features a man who sprays himself with liberal doses of AXE perfume. Pesto he is chased by young, curvy, petite, beautiful, cute, young women. They are desperate to have a piece of him (literally, any part of him is okay).

Murthy’s son it seemed, had a similar idea. He sprayed himself with liberal doses of AXE perfume and went out. It dawned slowly on Murthy as to why their dog was looking sick for the last three days and why she would slink to the corner of the room, the minute she saw his son. (Apparently what attracted young women to men was quite a nasty noseful to her).

To cut a long story short, despite wearing the AXE perfume continuously for three days, not one girl, dame, lady, women, madam, lass, filly or any person of feminine gender chased the boy. He was bitterness personified.

“Forget about chasing; they did not even look at me!!!!”, he complained. But you can’t keep a kid down, for long. Murthy’s prodigal son, an eternal book worm, brightened visibly and said, glibly, “But of course there is a silver lining. I am sure I will never get Malaria in my life”. “How is that?” asked his puzzled mother.

“What amma!”, he exclaimed, “The cause of Malaria is FEMALE Anopheles mosquito. And with the amount of AXE perfume on me, I am sure no female species of any kind will bother me” he added melancholically, “For a lifetime”. He left his mother goggling like a goldfish out of the water, completely helpless.