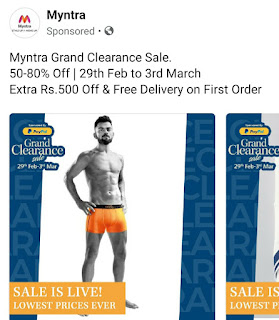 Timing is everything. With perfect timing, a word can become a missile, without it could become a missile that does not detonate! The recent Myntra advertisement is making waves for all the wrong reasons. (the credit for making me aware of this advertisement should go to my colleague at Siva Sivani Institute of Management, Mr. K. N. Srinath. It was Srinath garu who posted the advertisement on my WhatsApp).

The advertisement says “Grand clearance sale, 50 to 80% off, from 29th Feb to 3rd March”. It also says “SALE is LIVE, LOWEST PRICES EVER”. What a funny coincidence, the dates for the 2nd test match between India and New Zealand were from 29th February to 2nd March 2020. The Coup d’état was Virat Kohli in his undies extolling the lowest prices. Virat Kohli, the brand ambassador of Myntra.

The sale was from 29th Feb to 3rd March 2020. Is a coincidence? Well, it is not. The creative people from Myntra and the advertising agency thought that they had a coup. The company would have planned and conceptualized months in advance, inventories would have been piled up, and Myntra’s warehouses spruced up, expecting a considerable inflow of orders.

The creative hotheads at Myntra and the advertising agency did everything right. They thought that India would stream roll New Zealand. The widespread expectation was that New Zealand would whimper, curl up and surrender at the feet of the mighty Indians.

“We would emerge victorious. Virat Kohli would be basking in glory”. Myntra thought that they could bask too, in reflected glory. Boon of having a celebrity endorser – the rub-off effect. The positive energy, the glamour, the aura of the celebrity would create a spin-off to the brand endorsed. All Myntra had to do, was to wait and the see moolah roll in – at least in theory!

Myntra proposes and Indian cricket team disposes. Indians performed the way that most cricket experts were expecting. The performance was subpar and both the test matches ended in a whimper. The Indian tiger was tamed and was meowing like a tame pussy cat, and the New Zealand Kiwi’ sprouted enormous wings and became a deadly eagle – proud, stately and precise at execution of well laid out plans.

At the end of the tour, the Indians looked tired, dispirited, desperate to get away, and Virat Kohli was fuming. He was shouting at the spectators “I will show them (New Zealand) what it is when they come to India”. If it were not so tragic it would have been downright comical.

Virat Kohli own form nosedived, and his captaincy was in a scanner. His tactics of not having the inform K. L. Rahul and Wriddiman Saha were being questioned. Virat Kohli was at his low, and his stock had taken a hit, at least temporarily. He was the cynosure of all eyes, for all wrong reasons.

To Myntra’s horror, their campaign had suddenly become a butt of jokes. People started reading between the lines. The Indian team was in its lowest ebb. The advertisement says “End of the season sale”. It appears as if the Indian cricket team is at the end of the season and it is being sold off. And what is Virat Kohli saying “LOWEST PRICES GUARANTEED”.  Is Virat Kohli himself available at the lowest price?

Myntra learns a lesson, the hard way. Celebrity endorsement is a double-edged weapon; it cuts both ways. Just like a positive rub-off, there can be a negative rub off too. Myntra missed a trick. By the end of the first test match, the writing was on the wall. The Indian cricket team would get a dubbing. Myntra could have put the campaign on hold or cancelled it altogether. By going ahead with the campaign, they have created waves – for the wrong reason.