National Association for the Blind 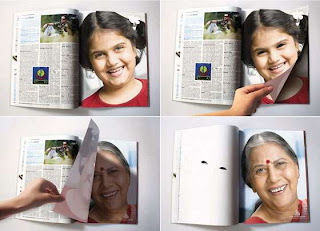 This magazine advertisement shows a smiling girl on first page. The 2nd page shows an old woman. When readers’ turns the page, they realize that the girl’s eyes are actually the old woman’s eyes. Readers also see the message, “Donate” and logo of National Association for the Blind on 2nd page. A wonderful example of creative advertisement.
SKOL Sensation, Brazil 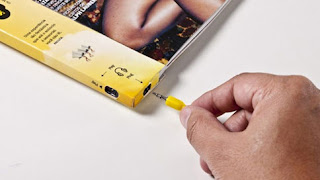 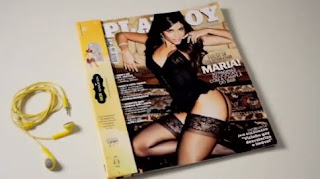 An advertisement by the Sao Paulo based ad agency F/Nazca Saatchi & Saatchi. An audio print advertisement of the first page of the magazine had a plug for the Brazil’s Skol Sensation music festival, wrapped around the spine of Playboy magazine. A mini-chip was inserted in the ad, allowing users to listen to an audio message whispered by a young woman.
read more creative magazine ads at : http://www.thetoptenz.net/creative-magazine-ads/
Posted by Dr. M. Anil Ramesh at 2:50 PM