26 ways to success - F for Feeling - "Trust your intuition" article published in The Hans India on 11th March 2016. 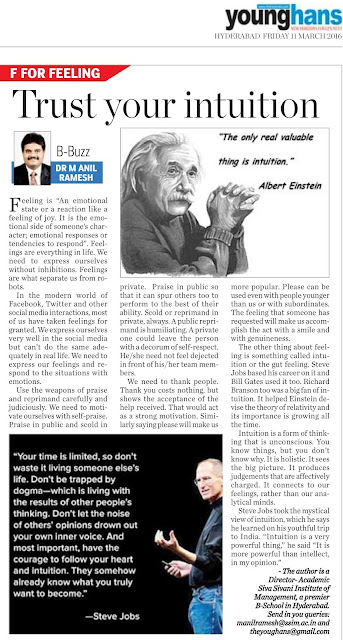 Feeling is “An emotional state or a reaction like a feeling of Joy. It is the emotional side of someone’s character; emotional responses or tendencies to respond”. Feelings are everything in life. We need to express ourselves and without inhibitions. Feelings are what separate us from robots.

In the modern world of Facebook, Twitter and other social media interactions, most of us have taken feelings for granted. We express ourselves very well in the social media but can’t do the same adequately in real life. We need to express our feelings and respond to the situations with emotions.

Use the weapons of praise and reprimand carefully and judiciously. We need to motivate ourselves with self-praise. Praise in public and scold in private.  Praise in public so that it can spur others too to perform to the best of their ability. Scold or reprimand in private, always. A public reprimand is humiliating. A private scolding could leave the person with a decorum of self-respect. He/she need not feel dejected in front of his team members.

We need to thank people. Thank you costs nothing but shows the acceptance of the help received. That would act as a strong motivation. Similarly saying please will make us more popular. Please can be used even with people younger than us or with subordinates. The feeling that someone has requested will make us accomplish the act with a smile and with genuineness.

The cricket commercial of Cadbury is a classic example of a feel. Made by Alyque Padamsee, it features a last ball of a match being slammed to a six and the girlfriend of the batsman breaking into a beautiful impromptu dance. This advertisement even though made over 30 years ago still retains that fresh feel.

The events that played out during the making of the advertisement were very revealing. The model who played the role of the girlfriend was not putting her heart into the role or there was no feel. She was not able to dance with total exuberance or with gay abandon. Padamsee was totally freaked out. Padamsee told the model “Think of the cricket player as your real boyfriend and think that the last ball six is needed for your father to give his acceptance to your marriage”.

Thus boosted, the model played her role to the hilt. She actually imagined the cricket player to be her own boyfriend and broke into a dance that is a pure joy to watch. It is a dance of joy and that encapsulates the entire advertisement. Express yourself with gay abandon. (Youtube search words - Cadbury cricket field ad).

Intuition is a form of thinking that is unconscious. You know things, but you don't know why. It is holistic. It sees the big picture. It produces judgements that are affectively charged. It Connects to our feelings, rather than our analytical minds.

Steve Jobs took the mystical view of intuition, which he says he learned on his youthful trip to India. “Intuition is a very powerful thing” he said “is more powerful than intellect, in my opinion.” Jobs's gut feelings dominated Apple.  Akio Morita also believed in intuition. He went against his entire team to launch a product that defined the Sony Corporation. The product – the iconic WALKMAN.

Morita was convinced that he had a winner in his hand even when his research team said exactly the opposite - that the WALKMAN would be a failure! Talk of the power of the gut feeling and Intuition.

Never lose the feel. Indian Cricket captain M.S.Dhoni is a practitioner of the feel factor. Yes some of his gut feel decisions have bombed, but the ones that succeeded, reaped India a great harvest.

M.S.Dhoni made Joginder Singh bowl the last over in the 2007 T20 word cup. That was a master coup. The rest as they say is history. India roared and went on to win the inaugural T20 world cup. And it was last ball nail biting finish over our arch rivals Pakistan. And that too without established superstars like Sachin, Dravid and others. Dil se Dil Tak!

Email ThisBlogThis!Share to TwitterShare to FacebookShare to Pinterest
Labels: 26 ways to success. F for Feeling, Best Newspaper articles, frequently asked questions in Placement Interviews, Guide to Interview questions, How to succeed, Qualities to succeed, Tips to be successful