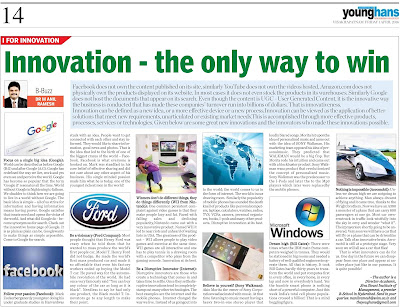 Innovation - the only way to win

Facebook does not own the content published on its site, similarly YouTube does not own the videos hosted, Amazon.com does not physically own the products displayed on its website. In most cases it does not even stock the products in its warehouses. Similarly Google does not host the documents that appear on its search. Even though the content is UGC - User Generated Content, it is the innovative way the business is conducted that has made these companies’ turnover run into billions of dollars. That is innovativeness.

Innovation can be defined as a new idea, or a more effective device or a new process. Innovation can be viewed as the application of better solutions that meet new requirements, unarticulated or existing market needs. This is accomplished through more effective products, processes, services or technologies. Given below are some great new innovations and the innovators who made these innovations possible.

1. Focus on a single big idea (Google): World can be described as before Google (B.G) and after Google (A.G). Google has redefined the way we live, work and yes even see and perceive the world. Google has become so popular that the term ‘Google it’ resonates all the time. World without Google is frightening to fathom. We shudder to think how we are going to live in a world without Google.

The basic idea is simple – all of us strive for information and having information means having power. Google satisfies that innate need and opens the vistas of the world. And what did Google do - become synonymous for search. Check out the innovative home page of Google. It is as plain as plain can be. Google wants to make things as simple as possible. Come to Google for search.

2. Follow your passion (Facebook):  Mark Zuckerberg a nerdy youngster doing his under graduate studies in Harvard was stuck with an idea. People want to get connected with each other and stay informed. They would like to share information, good news and photos. That is the idea that led to the birth of one of the biggest crazes of the world – Facebook. Facebook is what everyone is hooked on. Mark was steadfast in his core belief of effective sharing and did not care about any other aspect of his business. His single minded passion made him what he is today, one of the youngest richest men in the world!

3. Be a visionary (Ford Company). Most people thought that Henry Ford was crazy when he told them that he wanted to mass produce the world’s first people car, Model T. Henry Ford did not budge. He made the world’s first mass produced car and made it so affordable that even his factory workers ended up buying the Model T car. He paved way for the automobile revolution of the world. He had once very famously said “You can buy any colour of the car as long as it is black”. Needless to say he had only one product, the Black model T. Innovators go to any length to make their point.

4. Winners don’t do different things, they do things differently (WII from Nintendo): One common persistent complaint against video games is that they make people lazy and fat. Faced with falling sales and declining popularity, Nintendo came out with a very innovative product. Named WII it led to near riots and unheard of waiting lists in USA. The greatness of the product – WII allows people to play video games and exercise at the same time. WII games are all interactive and one has to play tennis in a drawing room with a competitor who plays from the gaming console. Innovation at its best.

5. Be a Disruptive Innovator (Internet):  Disruptive innovators are those who create a technology that comes in and takes time to settle. Once they settle disruptive innovations tend to completely stamp out many other technologies. The best examples are the internet and the mobile phones.  Internet changed the way we live. Instead of us going out into to the world; the world comes to us in the form of internet. The world is in our drawing room.

Similarly the popularity of mobile phones has sounded the death knell of products like personal computers, laptops, calculators, watches, radios, TVS, VCRs, camera, personal organizers, books, I-pods and many other products. Disruptive innovation at its best.

6. Believe in yourself (Sony Walkman): Akio Morita the owner of Sony Corporation was fascinated with music. At that time listening to music meant having a heavy two-in-one stereo player that loudly blared songs. Morita hit upon the idea of personalized music and came out with the idea of SONY Walkman. His marketing team opposed his idea of personal music. They predicted that WALKMAN would be a big flop. But Morita rode his intuition and came out with a blockbuster product. Sony Walkman was a product that revolutionized the concept of personalized music. Sony Walkman was the predecessor to the I-Pods and later the to the Mp3 players which later were replaced by the mobile phones.

7. Dream high (Bill Gates): There were times when the IBM main frame computers weighed in tonnes. They would be stationed in big rooms and needed a battery of well qualified engineers to operate them. All that is history. It took Bill Gates hardly thirty years to transform the world and put computes first in every office, in every home, in every lap and now in everybody’s hand. Yes the humble smart phone is nothing short of a powerful computer. Just this week India’s total cell phone populations crossed a billion! That is a mind boggling figure.

8. Nothing is impossible (Aeromobil): Unless we dream high we are not going to achieve anything. Man always dreamt of flying and it came true, thanks to the Wright brothers. Now we have an A380 a monster of a plane that can carry 800 passengers at one go. Most car owners struck in traffic look wistfully into the sky in envy and wonder “what if”.  Their prayers are shortly going to be answered. Very soon we will have a car that will fly or a plane that can be driven like a car. Talk of an innovative brain. Aeromobil is still at a prototype stage. Very soon we will all see a car that flies!

That is what innovators can do for us. One day in the future we can disappear from one place and appear at another place just like in our puranas. It is quite possible!

Email ThisBlogThis!Share to TwitterShare to FacebookShare to Pinterest
Labels: 26 ways to success. I for Innovation, Best Newspaper articles, frequently asked questions in Placement Interviews, Guide to Interview questions, How to succeed, Qualities to succeed, Tips to be successful