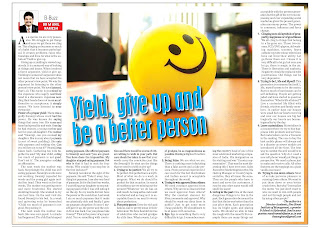 Yield – Give Up And Be A Better Person

As a species we are very possessive. We struggle to get things and once we get them we cling on. This clinging on becomes so much of a habit that it becomes pathological. It creates problems, ruins relationships and lives. So what is the solution? Yield or give up.

Giving up or Yielding is viewed negatively. It is a matured way of looking at things and issues. When involved in a fierce argument, yield or give up. Yielding to someone’s argument does not mean that we have accepted the other person’s viewpoint. We win the argument by listening to the other person’s view point. We have listened, that’s all. This tactic is practiced by the Japanese who sagely nod their head in a discussion. Japanese nodding their heads does not mean an affirmative or acceptance; it simply means ‘We have listened to your viewpoint’.

Power of a Proper Yield: There was a godly Swamiji whose word had the power. He was known for saying things that came true. His name and fame had spread far and wide. One day he had visitors, a young mother and her five year old daughter. The mother said “Swamiji, can you counsel my daughter. She is crazy about payasam (a sort of sweet pudding). She eats only payasam and nothing else. Can you tell her not to eat it?” Swamiji was taken back. Gathering his wits together he said “My dear child, eating too much of payasam is not good. Don’t eat it’. The youngster nodded an affirmative.

The next week the mother was back. Surprisingly the child was still eating payasam. Swamiji’s words were not working. Swamiji repeated his words and the young girl again nodded her head. Thus went on for four weeks. The mother was getting more and more frustrated. She started doubting Swamiji. She wanted to try one last time. On the next visit she found Swamiji in his bed. In a weak and quivering voice he beseeched “Child too much of payasam is not good. Stop eating it’.

The next week the mother was back. She was overjoyed. A miracle had happened. The child had stopped eating payasam. She offered payasam to Swamiji and said “you are great. You have done the impossible. My daughter stopped eating payasam. But why is that it had to wait for four weeks. Why couldn’t you stop her in the first instance?”

Swamiji recoiled at the sight of the payasam. He said “Take it away. Anything but payasam. I am also very fond of payasam. So for the first four weeks, I was telling your daughter to stop eating payasam while I was still eating it on the sly. So my words did not have the power or the conviction. Last week I ate so much payasam that it make me physically sick and finally I gave up payasam altogether. So once I myself gave it up, the power and the conviction was back. Can you please take it away?” That is the power of a proper yield. You so something with conviction and there would be scores of others willing to walk in your path. But care should be taken to see that your words carry the conviction just like the Swamiji’s! So what are the things that we need to yield or give up?

1.    Trying to be perfect: We all try to be perfect. But perfection is a myth. Most of what we do is a work in progress. What we do should be perfect for that occasion. In search of excellence are we missing out the present? Whatever we do has an end result. As long as the end result is achieved and as long as it is acceptable there is no need to worry about perfection.

2.      Play petty games: Even the rich and famous can be pretty mean in their behaviour. We have heard of stories of celebrities who carried grudges for a life time. What a waste. Let go of grudges, be as magnanimous as possible. Having a big heart matters a lot.

3.   Being Fake: We are what we are. There is nothing more infuriating than a fake accent and a fake persona. From personal experiences I can vouch for the fact that Indians and Indian accent is acceptable throughout the world.

5.     Ego: Ego is something that is very difficult to let go. I remember meeting the country head of one of the most celebrated marketing companies of India. His designation on the visiting card was “Country representative”. That was the most disarming title I have ever seen. Sales Executive/Marketing executive/Marketing Manager or Country representative, they all mean the same. They are the people who have to meet and serve the customers. A rose by any other name would still smell the same!

6.     Living in the past: One of the most dangerous things is to live in the past. Each generation bemoans the fact that theirs was better than the one after them. Each generation has its bright spots and glaring warts. We should we able to take the rough with the smooth! For example there are many things not acceptable with the present generation but the gift of the ever encompassing and ever expanding social media has given the present generation enormous power. The power to comment, influence and force change.

7.   Clinging onto old symbols of prosperity, happiness or of good times: We all cling to things that belong to a bygone era. Those two-in-ones, VCD/DVD players, old washing machines, scooters, heavy cathode ray tube colour televisions  have outlived their utility. Let go, throw them out. I know it is very difficult to let go, but once you let go, there is magic in the air. There is liberation and euphoria. Negativity would be replaced with positiveness. Old things can be very depressive.

8.    Trying to be I, Me and Myself: This generation is consumed by itself. I, Me, myself seems to be the motto. But too much of narcissism can be self-defeating. People are getting jaded and have started to question themselves. ‘What is life all about”? Live a contented life filled with friends, relatives and family members. In earlier days our houses were small but our hearts were big and now our houses are big but tragically our hearts are becoming smaller by the day.

9.  Leave materialism: Materialism is a concept where we try to buy happiness with products and services. But materialism can be a Tsunami in the making. The race to buy the best mobile phone will always end in a disaster as newer models are introduced all the time. The best way to combat this evil would be to ask the question ‘why do I need a new cell phone’ would put things in perspective. We need a phone just to make and receive calls. All other features are the toppings on a plain vanilla icecream!

10.  Trying to run down others: Most of us take perverse pleasure in running down others. We want to put them down or even better crush them. But why? Internalize the motto “we just don’t want to win; we want to win with people and not through people and not by using other people”.
Posted by Dr. M. Anil Ramesh at 11:09 AM

Email ThisBlogThis!Share to TwitterShare to FacebookShare to Pinterest
Labels: 26 ways to success. Y for Yielding, Best Newspaper articles, frequently asked questions in Placement Interviews, Guide to Interview questions, How to succeed, Qualities to succeed, Tips to be successful