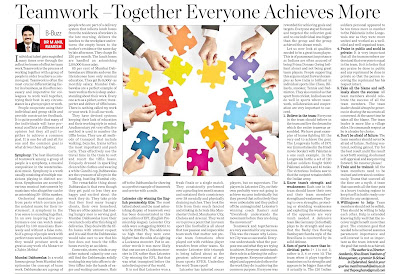 T for Teamwork
Teamwork – Together Everyone Achieves More

Individual talent gets magnified many times over through the collective lenses of effective team work. Teamwork is the process of working together with a group of people in order to achieve a common goal. Teamwork is often the most crucial differentiating factor in a business, as it is often necessary and imperative for colleagues to work well together, trying their best in any circumstance in a given project or work.

People cooperate using their individual and group skills and provide constructive feedback. It is quite possible that many of the individuals will have personal conflicts or differences of opinion but they all pull together to achieve a common goal. It is one for all and all for one and the common goal is what drives them together.

Symphony: The best illustration of teamwork among a group of people is a symphony, a musical composition in the western classical music. Symphony is a work usually consisting of multiple musicians playing in distinct sections. Symphonies are scored by various musical instruments by musicians who altogether can be an astonishing 30–100 in number.

Orchestral musicians play from parts which contain just the notated music for their instrument. A symphony in the true sense is sounding together. In an awe inspiring live performance one can watch music played by 100 musicians flawlessly and without a false note. So if a group of people work with perfect team work and harmony they would produce work as great as any work of a Mozart or a Zubin Mehta!

Mumbai Dabbawalas:  is a world famous group from Mumbai who epitomize the concept of team work. Dabbawalas are a group of people who are part of a delivery system that collects lunch boxes from the residences of workers in the late morning, delivers the lunches to the workplace and returns the empty boxes to the worker's residence the same day by late afternoon. They charge Rs 250/- per month. The lunch boxes are handled an astonishing 2,00,000 times a day.
85% of Mumbai Dabbawalas are illiterate and even the literate ones have only minimal education. They get Rs 8,000/- as monthly salary. Mumbai Dabbawalas are a perfect example of team work as there is deep understanding about their work. Every one acts as a picker, sorter, transporter and deliver of tiffin boxes. There is nothing called my work or your work. It is all our work.
They have devised systems keeping their lack of education and their working style in mind. A rudimentary yet very effective method is used to number the tiffin boxes. They use all methods of transport that include walking, bicycles, trains (often the most important) and push carts. They effectively use the travel time in the train to sort and resort the tiffin boxes. Uniquely dressed in sparkling clean white clothes and wearing a white Gandhi cap, Dabbawalas are the cynosure of all eyes in the hustling, bustling Mumbai city.
The remarkable thing about Dabbawalas is that even though they get paid so less they are happy and excited about the work they do. They take pride that they feed many hungry clients, their own home food. They are of the opinion that feeding hungry men is serving god. Mumbai Dabbawalas have their own lunch only after finishing all deliveries. They deal with the tiffin boxes with utmost respect and it is said that the Dabbawalas would take care to see that his foot does not touch the tiffin boxes even by an accident.
Come rain, storm, winds or any other natural calamity one can still find the Dabbawalas solidly working his way into offices to deliver tiffins into the hands of eager and waiting customers. Hats off to the Dabbawalas for showing us a perfect example of teamwork and service with a smile.
Leicester city winning the English premiership title:   The most talked about and the most astonishing display teamwork ever has been demonstrated in this year edition of EPL (English Premiership league). Leicester City odds were a staggering 5000:1 to win the 2016 EPL. The odds were so high that they were even higher than the odds of a sighting a lockless monster. Put in another words it was more likely that one can see a Lockless monster in UK rather than Leicester City winning the EPL. But that was what transpired before the unbelieving eyes of the world.

It is not that Leicester won a freak finals or a single match. They consistently performed over a grueling ten month season and sustained their consistency over 38 mentally and physically draining matches. They took the title from their much fancied and stinking rich rivals like Manchester United, Manchester City, Chelsea and Arsenal. They went on to prove a point that in a team sport like football it is all about that raw passion and impeccable team work that matter not precise team formations often played out with ruthless player transfers from other teams. No wonder Leicester title triumph is being talked about as the greatest achievement of any team sports EVER. Underline the word Team sport!

Leicester has talented soccer players, but no superstars. The players in Leicester City, on their own probably were not going to achieve success individually but they proved that collectively they were unbeatable and they pulled off the unimaginable! Leicester’s winning coach Ranieri said “Everybody understands the movement before they are doing the movement”
Teamwork and togetherness are very essential for any success. This was the reason why Leicester City was so successful. Everyone understands what the purpose was and what they are trying to achieve. Everyone understands their role in achieving the collective purpose. Everyone acknowledged and appreciated others for the work they do in achieving the common purpose. Everyone was rewarded for achieving goals and targets. Everyone stayed focused and targeted the collective goal and no one individual was bigger than the group and the group achieved the dream result.
Let us now look at qualities needed to be a great team player. This is of paramount importance as Indians are often accused of being Prima Donnas (being brilliant alone) and not being great team players. People supporting this argument put forward examples as how India is brilliant in individual sports like Chess, Billiards, snooker, Tennis and Badminton. They also remind us that apart from cricket, India does not do well in sports where teamwork, collaboration and cooperation are very important to succeed.
1.   Believe in the team: Everyone in the team should believe in the team and live the dream for which the entire team was assembled. We have great examples of teams fighting till the very end to achieve the goal. The Longewala battle of 1971 war (immortalized in the Hindi movie Border) with Pakistan is a one such example. In the Longewala battle a set of 120 Indian soldiers fought 2000 Pakistani soldiers and 45 tanks. The victorious Indians saw to that the outpost remained with the Indian army.

2.   Know team’s strength and weaknesses: Each one in the team should know their own and their team members’ strength and weaknesses. Playing to own strengths, protecting or shielding weaknesses and exploiting the weaknesses of the opponents are very much needed. A defensive team like Germany (in football) plays to its strength and sees that the flashy free flowing flamboyant Samba style of the Brazilians is countered by its solid defense.

3.   Sum of parts is more than individual parts: 1+ 1 is not 2, rather is 3, 4 or even 10. The team when it plays together maximizes on its strengths and appears to be bigger than what it actually is. The 120 Indian soldiers personal appeared to be ten times more in number to the Pakistanis in the Longewala war as they were more united and worked as a well-oiled and well organized team.

6.    Don’t be afraid of failure: The team member should never be afraid of failure. Nothing ventured, nothing gained. Try for the best result and if the result is not forth coming, do a honest self-appraisal and keep moving forward. No rancour please!

7.   Train and be trained: All the team members need to be trained and retrained continuously. Teams that succeed all the time are a myth. A team that succeeds all the time puts in a heavy training regime to keep itself in battle ready condition for any assignment.

8.    Willingness to help: Team members should not selfish. They should be willing to help each other. Help is extended knowing fully well that the receiver might benefit more than giver. The common goal that needed to be achieved assumes paramount importance and self-interest is not as important as the team interest and the goal that needs to achieved.

Email ThisBlogThis!Share to TwitterShare to FacebookShare to Pinterest
Labels: 26 ways to success. T for Teamwork, Best Newspaper articles, frequently asked questions in Placement Interviews, Guide to Interview questions, How to succeed, Qualities to succeed, Tips to be successful