Best seat in the world - A study in human behaviour 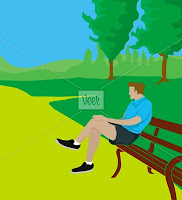 The story is a study in human behavior. After the Second World War the super powers had realized the futility of atom and nuclear bombs. The bombs were very effective but create a monster that was very difficult to reign in. The damages are very high both for humans and the environment. The effects of a nuclear bomb are felt for more than 30 years. The effects of radiation not only affect the bombed country but the surrounding countries too.
The super powers have come out with a new bomb. It was called a neutron bomb. Neutral bona is a deadly new bomb. When deployed it kills all the animal form but does not create any other damage. There is no radiation. There is no problem of any damage to the country’s infrastructure. The invading country can come in and occupy the bombed country at leisure. But there is a catch; they will have to wait for some time till the carcasses of dead animals get rotted away.

Once in a fit of anger one super power deployed the neutron bomb on another country. It had a huge impact. Planes crashed, trains ran off rails, there were massive traffic jams and there were major accidents and all animal life in that country was wiped out. It is the scene that was too frightening even to fathom.
Except for some mosquitoes and a few rats everything else was rotting. The roads had become unwalkable. There was no chirping of birds, no movement. It was a country of the ghosts. But like all strange things in life ONE MAN survived. He got out of coma after 10 days and could not believe what was happening around him. There was plenty of food but it was rotting. There was no electricity, no safe drinking water and absolutely no civil order or society.
No one was visible on the roads, no newspapers, no TV and radio and there was a deafening silence. Our man was getting mad. There was no one to talk and nothing to do. To keep himself sane he started taking long walks. The walks were drab and uninteresting but they helped him stay alive.
Our man got into a pattern of behavior. He went to the same park; it was an apology of a park. It has rotting trees and the park had a terrible stench – the stench of death. Our man always sat at the same bench. It was a very huge park and it had many benches but our man always sat on the same bench.
Three months passed this way and after three months when he was sitting on his bench he saw a sight that made his heart leap into his mouth. It was a sight of a very ragged man slowly walking towards him. He too had obviously survived the holocaust. As far our man was concerned they were the only two living people in the entire country.
The other man slowly walked to our man and said in a faltering voice “Excuse me you are sitting on my favorite bench.  Please vacate it at once please”
Posted by Dr. M. Anil Ramesh at 7:30 PM