Marketing Communications– The case of Perrier Mineral Water in USA 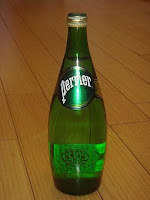 The spring in Southern France from which Perrier is drawn was called Les Bouillens. Local doctor Louis  Perrie bought the spring in 1898 and operated a commercial spa there; he also bottled the water for sale. He later sold the spring to Sir Saint-John Harmsworth, Harmsworth closed the spa, He renamed the spring Source Perrier and started bottling the water in distinctive green bottles.

Harmsworth marketed the product in Britain at a time when Frenchness was seen as 'chic' and aspirational to the middle classes.

Soon Perrier spread its wings and went across the Atlantic. It went to the USA, the mother of all market places. The timing was perfect. The company did market research.  The 4 Ps were fine-tuned to a nicety, the pricing as perfect, the trade was told how to take care of the demand  and the launch was impeccable.

The results were disconcerting. The product was not doing as well as expected. The feedback was positive. There were no complaints about the quality or the price, promotion or  distribution. So  what was going wrong?

To understand what was going wrong we will have to delve deep into the psyche of a typical American. Americans are brought up on Coke and Pepsi. They find drinking water alien. The author's personal experience was very enlightening. When asked for water, most of the bartenders had a puzzled expression. Thy would hand out plastic cups. The plastic cups would have H20 written on them. The author himself had to go to the soda fountain and get a fill of water.

Amercians do drink water. But the water has to be colored. Adding color to the distinctively crystal clear Perrier mineral water would be going against the grain of the product itself. So what to do?

Taking the help of the American psychology a solution was arrived at. Americans have a fight going on with themselves all the time. America is filled with calorie filled goodies and quite frequently  a typical American would gorge himself on fatty foods and  wash it down it with  a huge glass of Coke or Pepsi. Then the guilt would step in. He/she would make a beeline to the nearest gym or a tread mill and try to work out the calories that he/she had binged upon.

Perrier hit upon a brilliant idea. Their next campaign talked about Perrier as a “zero calorie drink”. There was an underplaying of the word water and emphasis on the catch phrase “Zero calorie”. It was clearly saying eat what you want to eat but instead of washing it down with Coke or Pepsi have Perrier and save 300 to 400 calories as water is totally calorie free.

Perrier showed us how a product need not be tinkered all the time, One can subtly change the communication and the product could be set on the certain path of success.
Posted by Dr. M. Anil Ramesh at 7:30 PM