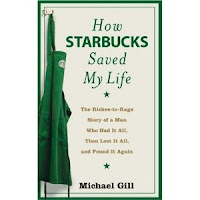 How he accepts the job and learns step by step and becomes a good employee is the rest of the story. His terror at handling the cash counter is graphically told. He is terrified of the cash counter. To avoid the cash counter he becomes the best toilet cleaner at Starbucks. He throws himself into work and becomes the proverbial funny guy. He is well liked by his colleagues and he learns to respect them as they are and not based on their qualifications or by fancy designations. At the end he touchingly describes how he likes his job at Starbucks better than the one at JWT. He feels more respected and more needed. Gill is finally at peace with himself. But he faces a new challenge. He would have to relocate and be a part of the Starbucks in his own locality.
The beauty of this book lies in the fact that it bring to life the horror that many of us are pretending does not exist or that it will not happen to us – the fear of losing it all; that too when one is not in one’s prime youth. Losing a job in the late forties or early fifties. That is a stage when the employee slows down physically but is at the prime intellectually. He might not be looking young, fit and fresh but he has so much to offer. So should this axe called downsizing, right sizing or any other fancy term for denying someone his job, life and pride be wielded so mercilessly?
What happens to the employee when he loses his job? No one else wants him and it is a downhill slide from then on. But luckily in “How Starbucks saved my life” a way out is shown. Fictional and as clichéd as it sounds it is still a solution. Gill plots the story with fine acumen. But the frequent flashbacks to the past interrupt the flow of the narrative. But there are lots of lessons to learn. Lessons on how not to rest on one’s glory. Of how to recognize the danger signals of redundancy in the organization. Of being aware of what is fashionable and what is not fashionable.
The author seems to have a love-hate relationship with women. He appears to have very mixed feelings about them. He has stormy relationships with all of them including his wife, his mistress and his children. The only women with whom he has a normal working relationship is with Crystal his boss at Starbucks. I suspect that Gill has subordinated himself to Crystal as he was scared of losing his job.
Posted by Dr. M. Anil Ramesh at 11:19 PM