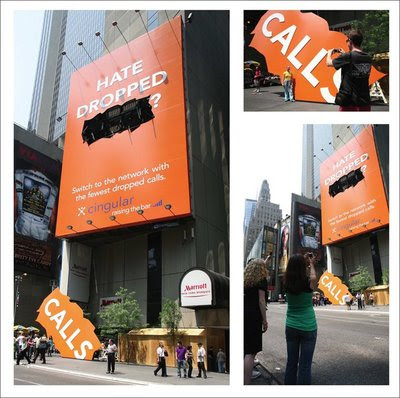 Most people feel that television advertisements are the best when it comes to promoting the products. They feel that out of home (OOH) advertisements are to be despised and at best ignored. But Out Of Home or hoardings as they are popularly called have many advantages.
But care should be taken to see that the OOH campaigns are visual in nature and topical. The best example of topical OOH advertisements is the campaign that is run by AMUL. The campaign has become so famous that people wait with baited breath to find out what is the topic that the AMUL girl will be focusing on.
Given below is one advertisement that I found on the internet. It had that Oomph appeal or the surprise element. It features people looking at a hoarding that says “Hate dropped (and next to the word dropped is a huge hole in the hoarding)”. At the base of the hoarding is the cutout of the word calls that has dropped from the hoarding to the ground. It takes a few seconds for the viewers to comprehend the advertisement which is “Hate dropped calls”. The art director has cleverly used the dropping of calls to literally drop the word itself from the hoarding to create very powerful visual imagery.
Posted by Dr. M. Anil Ramesh at 12:21 PM