Costco focuses on selling products at low prices, often at very high volume. These goods are usually bulk-packaged and marketed primarily to large families and businesses. Costco does not carry multiple brands or varieties where the item is essentially the same except when it has a house brand to sell, typically under the Kirkland Signature label.
This results in a high volume of sales from a single vendor, allowing further reductions in price, and reducing marketing costs. If Costco management feels the wholesale price of a product is too high, they will refuse to stock the product.
Costco also saves money by not stocking extra bags or packing materials. To carry out their goods, customers must bring their own bags or use the merchandise shipping boxes from the company's outside vendors. 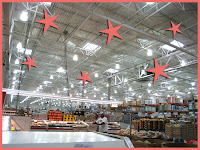 Lighting costs are reduced on sunny days, as most Costco locations have several skylights. During the day, electronic light meters measure how much light is coming in the skylights and turn off an appropriate percentage of the interior lights. During a typical sunny day, it is very common for the center section of the warehouse to have no interior lights powered on.

Most products are delivered to the warehouse on shipping pallets and these pallets are used to display products for sale on the warehouse floor. This contrasts with retail stores that break down pallets and stock individual products on shelves. Costco limits its price markup on items to 15%.
Typically the decor and the fittings are utilitarian and the stores are located in places where the real estate prices are low.

Costco is only open to members and their guests. Memberships must be purchased in advance for one year. Purchases made at Costco's website do not require a membership; however, a 5% surcharge is added to purchases made by non-members. Purchases made with Costco Cash Cards also do not require a membership, and there is no surcharge.
As of November 2009[update] membership fees at Costco are $50 per year for a Gold Star (individual) or Business membership, which can be upgraded to Executive membership for an additional $50 per year in the USA.
Costco memberships can be refunded in full at any time before they expire. Costco guarantees almost all of their products with a full refund within a reasonable amount of time. Exceptions include televisions, projectors, computers, cameras, camcorders, digital audio players, and cellular phones. These may be returned within 90 days of purchase for any reason for a refund.
After 90 days those returns must be done through the manufacturer according to the terms of the warranty. Costco has negotiated with manufacturers to extend the manufacturer’s warranty to two years for new TVs and computer

Over the years Costco has gradually expanded its range of  products and services. Initially it preferred to sell only boxed products that could be dispensed by simply tearing off the shrink wrap off a pallet. It now sells  many other products that are more difficult to handle such as fresh produce, meat, dairy, seafood, fresh baked goods, flowers, clothing, books, computer software, vacuums, home appliances home electronics, solar panels, jewelry, tyres, art, wine, furniture and caskets.

Kirkland Signature is Costco's store brand, otherwise known in the retail industry as an "own-brand," "house brand" or "private label" It is found exclusively at Costco's website and Costco warehouses and is trademarked by the company.
Posted by Dr. M. Anil Ramesh at 11:16 AM