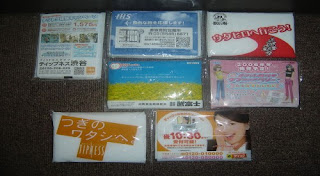 Tissue-pack marketing: Companies use small, portable tissue packages to move advertising copy directly into consumers' hands. About 4 billion of these packages of tissues are distributed on the streets annually in Japan—largely outside of subway stations.
The concept of tissue-pack marketing was first developed in Japan. Its origins date back to the late 1960s when Hiroshi Mori, the founder of a paper-goods manufacturer in Kōchi Prefecture called Meisei Industrial Co., was looking for ways to expand demand for paper products. At the time, the most common marketing freebies in Japan was boxes of matches. These were often given away at banks and then used by women in the kitchen.
Mori figured tissues would have even wider appeal than the matches, and as a result he developed the machinery to fold and package tissues into easy-to-carry, pocket-size packs. The new product was marketed only as a form of advertising and was not sold to consumers.
Posted by Dr. M. Anil Ramesh at 9:27 PM