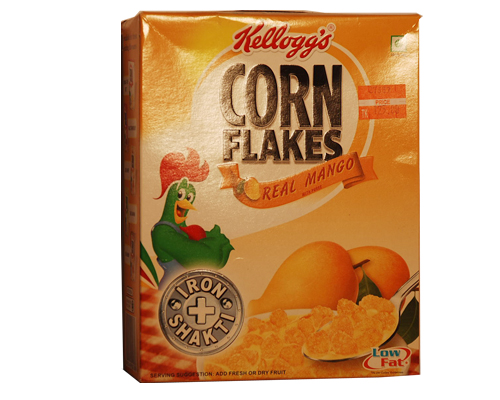 very quickly realized that it made a mistake by taking the traditional Indian breakfast head on. It was too much of a risk and a Himalayan task of overcoming eating habits inculcated over the centuries. Kellogg took a leaf from the marketing strategy of Nestlé’s Maggi two minute noodles.

The USP of the Maggi noodles is that it is fast, convenient and a fun product. It is convenient for the mother to prepare and it is very attractive to the child to consume. At the same time the mother is very careful about what her child eats. Maggi noodle is positioned as the ideal snack between the time the child comes home and dinner. It is given to the child as a hunger quencher when the child comes home. The child’s hunger is satiated but only till the dinner time. Maggie’s strategy was brilliant and it paid off.
Kellogg did a quick re think. It latched onto the supplement positioning.

It came out with a campaign which stated that Kellogg corn flakes come in where the Indian breakfast stops. In other words if the Indian breakfast gives the child 85% nutrients the rest of the nutrients can come from Kellogg. The positioning of the food supplement was taken by Kellogg. It was saying to the Indian consumers “eat whatever breakfast you want to eat but to get that extra nutrition have Kellogg”.
Definitely a climb down for Kellogg. Its advertisement says that it. The advertisement shows a small child eating the traditional Indian breakfast and the ticker quickly adds and shows 85%. That is the amount of nutrients that the child had received. The next shot show the child on his tricycle going to a mock petrol station and he gets a fill of the rest of the 15% nutrients from his smiling mother, courtesy Kellogg. 85% of nutrients from Indian breakfast and the rest 15% of the nutrients come from Kellogg.
Over the next few years Indian cereal buyers were introduced to Kellogg’s Wheat Flakes, Frosties, Rice Flakes, Honey Crunch, All Bran, Special K and Chocos Chocolate Puffs – none of which have proved to be very popular.
Kellogg India

also attempted to indianize its range. Its Mazza branded series of fusion cereals, with flavors such as mango, coconut and rose, met with lukewarm response. It also introduced less priced packs priced at Rs10/-. This strategy might work in a price conscious market place like India.
Recently Kellogg has decided that it would take the route of repositioning. It has now come out with a campaign that says that its corn flakes are very good for people who want to lose weight. Its has  repositioned its corn flakes as diet food and according to Kellogg consuming its cornflakes for two weeks could lead to a weight loss of 2.5 kgs! (watch the advertisement).
Posted by Dr. M. Anil Ramesh at 9:54 PM