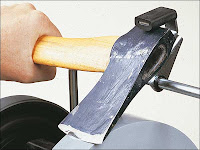 Sharpening the axe: If you have 24 hours to cut a tree, spend 23 hours and 30 minutes sharpening the axe. What it means is one needs to practice his trade. A circus performer always practices in the morning before he performs in the evening. For the first mistake that he makes will be his last. Take the example of Sachin Tendulkar.
Sachin Tendulkar once was playing a club level match. Club level matches are played only for fun and the run scored are not taken into consideration for records. Sachin came out in full gear including his helmet that had the Indian flag. There was lot of fooling all around Sachin. His team mates had their wife and children with them. But Sachin was in the zone. He was concentrating hard. He went to bat. He scored a few runs and was adjusted LBW (leg Before Wicket). As he was walking back a cricket reporter happened to see the expression on Sachin’s face. Sachin was extremely upset with himself. This happened in the year 1991. By that time Sachin was already a super star. He has nothing to lose but showed seriousness.
Sachin has a super killer instinct. He is so ultra competitive that he hates to lose in any game. It is said that he does not like to lose in any sport even in table tennis. His wife Anjali told Sachin to lose at least to his son. When asked how many times he lost to his son Arjun, Sachin innocently replied “well I lost may be 3 or 4 times when playing with Arjun. But mind you that was when he was small”
Ramnath Archekar the cricket coach of Sachin and Vinod Kambli believed that Kambli was more talented than Sachin. See where Sachin has ended up and where Vinod Kambli ended up. Vinod Kambli scored the fastest 1000 runs among all Indian cricket players but ended with another 84 runs more only. The total runs scored in Kambli’s entire career are surpassed by Sachin in a single year! Not once but many times over.
It is not enough to be supremely talented. That talent has to be translated into results. Sachin has played test cricket since 1989 that is for a mind boggling 22 years. To break Sachin’s records the next cricket prodigy has to start at the age of 16 and has to continue playing for the next 25 years.
Americans, Britishers and Indians: When a Indian sees another Indian, the first thing that one would ask the other is “what is your salary?” In India the salary drawn is very important and the pecking order in the society is decided by the salary. The higher the salary more is the respect that he receives in the society.
When a Britisher sees another Britisher he would ask “what is your designation?” In aristocratic Britain titles are very important and fancier the title more is the Britisher impressed.
When an American sees another American he would ask “what is that you do in the organization?” Americans are very practical people and get turned on by the type of work that one does in the organization. That is the precise reason why Americans do not find great charm in doing the mundane and iterative jobs that are plentifully available in the IT and the ITES sector.
Posted by Dr. M. Anil Ramesh at 6:41 AM

Email ThisBlogThis!Share to TwitterShare to FacebookShare to Pinterest
Labels: Concepts in management