Products that did not do well, New Coke and Pepsi AM 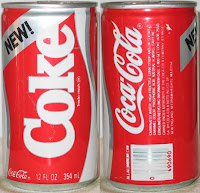 The market place is a great leveler. It brings down the giants quickly and mercilessly. The bigger the company the faster they are brought back to realities of the market place.
The most cited example is that of the new Coke that was introduced by Coca-Cola.

Market research clearly showed that the young generation liked the taste of Pepsi. This was started by Pepsi who used the concept of a blind trail. Blind trail is a form of product testing where the consumers sample the product blindfolded and then choose the better tasting products. The blind test by Pepsi showed that the consumers overwhelmingly chose Pepsi over coke. It looked as if Pepsi was a product for the young and the hep generation and Coke was the product for the old and stodgy. The media campaign by Pepsi touting the results of the blind trail were so effective that even Coca-Cola

bought the idea.
Coke went through extensive market research and product development and launched the New Coke and expected to rake in the moolah. Simultaneously it withdrew the old Coke. To its surprise consumers rejected the new coke and there were protests all around. Consumers rallied around and there was a hue and cry. Coke in its old form was seen as an iconic American brand and the Americans did not want Coca-cola to tamper with their favorite product. Later Coca-cola introduced the old coke and called it Coke Classic.

fared no better. The biggest competitor for Pepsi of course is Coca-Cola.

But their bête noire is not each other but the coffee and tea that people drink early in the morning. Most people would like to have their shot of caffeine or thiamine (the stimulants present in Coffee and tea) and they get that shot from their favorite cuppa. Pepsi came out with a grand idea. It developed a product that is high in caffeine and introduced a product Pepsi AM. Pepsi was gung-ho about its product. It was a beautiful combination of a soft drink and caffeine.
Consumers rejected the product outright. They wanted a shot of caffeine but they wanted it with their coffee. In short people were used to having something hot in the morning and a substitute product when it offers the same stimulant would not be accepted as the substitute was cold. Most of us are not used to having something very cold early in the morning. This effectively rang the death knell for Pepsi AM. 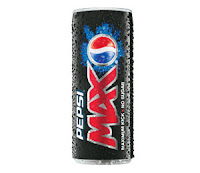 Pepsi introduced a product called Pepsi Maxx in India. It is a 250 ml soft drink that comes in a can. The product claims to have no sugar at all. Pepsi extols the virtues of the concept of "maximum" over that of "zero." It is a counter to the Coke’s diet coke campaign of Zero calories. In India Pepsi is promoting Pepsi Maxx as a energy maximizer as it has caffeine. The product also claims that is not suitable for children.
For a product category that hinges so much on patronage from the children it would be interesting to see how Pepsi Maxx would fare in the Indian market if it is denied to the children. One should not forget that India has very young population. Pepsi need not worry. Enforcement of the rules is quite lenient in India and I am sure that any child who asks for Pepsi Maxx would get it. I am also sure that the restriction of Pepsi Maxx is a statutory obligation because of the caffeine content and not a voluntary restraint from Pepsi Co.
Posted by Dr. M. Anil Ramesh at 10:14 AM