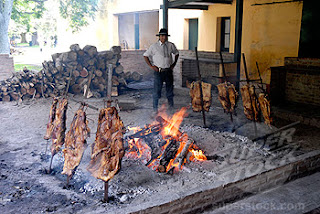 Going to USA is a thing that excites and frightens lots of Indians. It is proverbial Mecca of opportunities but most Indians are worried about the so called bohemian life style, the eating habits and the fact paced life.
A suddh (ultra pure) Brahmin boy had gone to the USA to do his MS. This boy came from a family of Acharyas (a sect of pujaris who are the temple Brahmins). These Brahmins are very particular about madi (a ritual where the food is prepared after taking a bath and the lady of the house will not touch anyone when she is preparing the food).
The poor boy’s worst night mares came true. He was suffering as there is nothing that is pure vegetarian in the USA. Even vegetarian noodles will have a omlette on the top. Our boy was suffering. He was surviving on bread alone. One day he was travelling by the Greyhound bus and he saw a sign that made his heart sing. The sign said “Indian restaurant”. The boy rushed in.
What he finds inside turned his insides out. The restaurant had a huge steak which was being roasted. The restaurant was full of Americans and had a fair sprinkling of Native Americans who were having beer and beef streak. The Brahmin boy almost fainted. He staggered out of the restaurant.
Later a friend of his at the university explained him what the sign meant. “Indian restaurant” means a restaurant that is managed by the Native Americans. The Native Americans are called Indians in USA. The Brahmin boy was confused as the local population is called Indians and the Native Americans are referred as red Indians. This created such confusion that the poor Brahmin almost gave up eating altogether.
Posted by Dr. M. Anil Ramesh at 9:17 PM