Cricket advertisements that caught the Eye (Part - I) 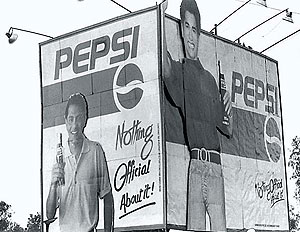 Youngsters or the generation Xers made the campaign their own and it symbolized the mood at that particular point of time. At that particular time everything official was portrayed as old, boring and outdated. Unofficial was new, exciting and trendy. Unofficial is the rebel and all things that are anti establishment  are attractive to the youngsters or generation Xers. By using the campaign “Nothing official about it” Pepsi got more mileage for its campaign than the official sponsor Coca Cola. This campaign was done in the 1996 world cup.

Hands Free comfort – VIP: This very entertaining advertisement of VIP garments makes the point very dramatically. Tight under garments make the wearer very uncomfortable and they tend to scratch themselves. That means lots of hand gesturing. The umpire gesticulates once a wide ball is bowled. The crawlie immediately appears which says “Hands free comfort” If one uses VIP one can experience hands free comfort. Whenever we watched the umpire makes hand gestures we were reminded of the advertisement and the campaign.

IBP Red – Aaj Ka Sikhar: IBP Red was the company that made lubricating oil for the vehicles. IBP Red Sikhar was the most menacing bowler who took the most wickets. The connection – Aaj Ka Sikar is the hunter just like IBP Red lubricating oil that hunts the rust and keeps the engine going on and  on.

Close Shave – Godrej:  Whenever there is a case of a batsman escaping from a  close run out or a catch being spilled or LBW (leg before wicket)  decision being turned down the graphic immediately comes on – Godrej close shave. That is the closest that a batsman got to getting out. As close a shave that you can get from Godrej shaving cream.