India and cricket - made for each other 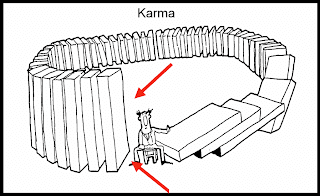 Indians have taken to cricket like a duck takes to water. This was one sport that was invented for Indians. It’s leisurely way of progress, it’s funny rules and interpretation of the rules, the way the game is played and the way the game can suddenly change, the emphasis of individual brilliance and the beauty that there might not be a result even after five days of play was right up the street of the Indians. The game of cricket was proving the Karma theory right. “Do your duty without expecting the results. The result would be taken care off”.
Thus it is not surprising that Indians who take many a injustice lying down which are being inflicted upon them stoically react wit alacrity and fury once the holy grail of cricket is touched. The instant branding of Mike Denniss as “Denniss the Menace” vouches for the fact. Mike Dennis was the Match adjudicator who had handed out heavy fines for the Indian cricket players for their concerted appealing during their tour of South Africa.
The interest created by the betting scandal, or in Sachin’s back or his feet proves the fact that for Indians cricket is no longer a game. It is a religion. If cricket is a religion then Sachin is the god! It does not come as a great surprise that one of the biggest blockbuster hits of Indian film history 'lagaan' is a masala movie that has village simpletons playing cricket. Quite naturally the village simpletons win against the suave and sophisticated Englishmen. The movie Lagaan was nominated for the Oscars. The members of the Motion pictures association of America found the movie to be too long, the sport too strange to digest and the songs and dance too funny! A cocktail of concoctions that they simply could not digest.
The author can remember bygone days when he along with his father would tune breathlessly late in the night or early in the morning to catch the squeaky sounds emanating from the radio to catch the cricket commentary coming from the Caribbean Islands. The excitement of G. R. Vishnwanth cracking an exquisite square drive or a delicate late cut was something that is etched in my mind.
I also remember watching live a match between Sri Lanka and India that was played in Lal Bahadur Shastri Stadium at Hyderabad. All I remember is the roaring of the crowds and the banana peels that they threw at each other. I do not remember any cricket action. We were seated very high in the gallery and could hardly catch any action. We also did not have a radio. There was no way we could know the score. But the experience was exhilarating.
The way we watch cricket also has changed. The game has changed and how! The boisterous crowds, the flamboyant players, media savvy cricket managers, the game has transformed itself. One day cricket introduced colored clothing. Once sniggered as pyjama cricket one day cricket was the fore runner of the hugely popular 20/20 cricket. The way we watched cricket also has also undergone metamorphosis. 14 to 20 cameras slow motion replays, cameras panning the crowds, the venue being marketed as a tourist destination, you have it all.
Posted by Dr. M. Anil Ramesh at 8:08 PM