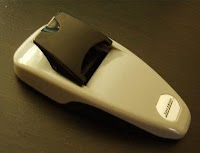 9. Differences in cultural standards and difficulty of using the product:  An American company was marketing automatic shavers in Japan. The American company quickly realized that the Japanese hand is much smaller than the American hand and retooled the automatic shaver to fit the hand of the Japanese (17).
Six yard saree had always remained the final frontier as a dress for the women from the western world. It was the exotic Indian dress that the western women always liked and admired but were wary of - the saree is difficult to drape. They were always apprehensive about the saree; they would never know when it would slip off their body. They need not worry any longer. Zipped sarees (18) are now available. They can be worn as easily as jeans and they snugly fit the body. Is it said that Madonna wears the zipped sarees and likes them a lot.
Same is the case with the dhoti for the men and children. It is now possible to buy zipped dhotis (19) and appear to be like an Indian. Body piercing and tattooing is like the coming of age ceremony akin to an initiation process into the world of adulthood. Customers bear the pain. It is painful but the tattoo has to be worn to show that the person is an adult.
One fashion that is never going out of business is to have the name of the loved one pieced at various places. But a problem arises - what happens when one changes a partner? In steps the Indian art of Mehendi (20). Mehendi can be branded in America as temporary tattoo. Intricate designs can be made and the wearer could wear the names of the loved one with pride. The temporary tattoo would fade off and it could be replaced with a new one. If the tattoo is not liked it reversal process is very painful and expensive. But Mehendi being temporary the wearer need not worry about the permanency of the design or the name.
10. Availability of other products, Greater or lesser product integration:  Products need accessories to make them work better. For example American made printers and copiers will have to be adaptable to use locally available paper and toners.
11. Availability of materials, Change in product structure and fuel: In most countries cars mostly run on petrol. But in India because of governmental policies diesel is cheaper than petrol. Cars imported to India should have the option of using diesel as a fuel (21) or should develop diesel models to be competitive. Same is the case with generator sets that are imported to India. In india kerosene is a cheap fuel and a generator that can run on kerosene (22) will be a big hit.
12. Power availability and resizing of product: Radios exported into Africa need to be resized. Power supply is erratic in Africa and batteries are not easily available. Thus it is imperative that radios sold in Africa be provided with a self winding mechanism (23) so that the users can enjoy their service for longer time.
13. Product redesign or invention: MacDonald the fast food giant is a master of product adaptation. They had to make the adaptation of completely dropping the hamburgers (24) in the Middle Eastern countries where the word Pork is hated.
Mac Donald serves beef, mutton or Chicken that too only halal meat (25) respecting the local sentiments. Similarly in India Mac Donald faced huge problems. Pork and beef are disliked. Muslims do not like pork and Hindus do not like beef. Thus in India Mac Donald serves mutton or chicken only (26), no beef and no pork. It also serves vegetarian burgers. It has named its vegetarian burger as Mac Aloo Tikki (27) a very popular version of its Mac Donald burger.
Posted by Dr. M. Anil Ramesh at 1:07 AM