5 Ws and 1 H of communication 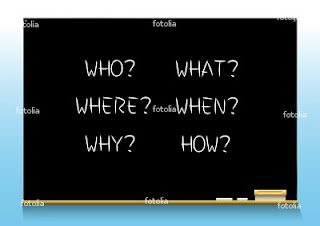 In journalism and in reporting the Five W's and one H is a concept in news style, research, and these are regarded as basics in information-gathering.
The "Five W's" and one H were memorialized by Rudyard Kipling in his "Just So Stories" in which a poem accompanying the tale of "The Elephant's Child" opens with:
I keep six honest serving-men
(They taught me all I knew);
Their names are What and Why and When
And How and Where and Who.
It is a formula for getting the "full" story or report on something. The maxim of the Five W's and one H is that for a report to be considered complete it must answer a checklist of six questions, each of which starts with the letter W:
Who is it about? (The person or the persons involved in the story are very important. Readers are very interested in the human element and a story without a human interest is as tasty as an Indian curry without the famous Indian masala!)
What happened (what's the story. What really happened? The story has to be told clearly and lucidly. The story should have a logical flows and the ending should be lingering)
Where did it take place? (The location of the story too very important. Did the story take place in a local area, in the state, or in the same country? Many stories are read only if there is a local interest. Yes stories are also read which are not local in nature but the event has to be so important that boundaries are no longer significant. For example the earthquake and the Tsunami of Japan is a gripping read for any person in the world.
Students being deported from a country will not attract much attention. But Indian students being deported from USA will grab headlines as it concerns the Indians and they being departed from the land of opportunities or God’s own country makes the story even more gripping.
When did it take place? (When is the issue of immediacy. The story has to be told and told as soon as possible. News stories lose their charm once the news becomes dated. Yes the same new can be used again if there are further developments or of the story keeps continuing).
Why did it happen? (Why is the motive or why the story has to be told. Why explains the story and makes it logical. In one of the Sherlock Holmes story Sherlock is placidly sitting and smoking his cigar at the scene of the crime. The scene of the crime is a palatial building where a murder has been committed. There is plenty of hustle and bustle around him. Detectives are everywhere. They are looking for foot prints, finger prints or any other clues. In short they are busy as bees.
This irritates Dr.Watson, Sherlock's trusted deputy. He says “Sherlock why don’t you do something?” Sherlock replies “Why should I do anything the murder has been solved” “Solved” gapes Watson “how” “Why didn’t the dog bark?” says Sherlock. This opens a new process of thinking. Sherlock rightly argues that the pet dog never barked when the murder was being committed. His deduction which is later proved is that the pet dog will only bark at strangers and as it did no bark it means that somebody known to the dog or somebody from the house has committed the murder.
How did it happen? (How is the modus operandi. The modus operandi is critical as it tells the reader how the entire story unfolded and how it was planned and executed. How become very important for the police as the modus operandi is like a signature tune and many criminals tend to repeat their modus operandi. A repeated modus operandi make it easier for the police to nab the concerned criminals.
Posted by Dr. M. Anil Ramesh at 5:01 PM