Fans - the word that excites the cricket players through the world. It is said that playing cricket before 1,00,000 fans in Eden Gardens, Kolkata is an experience so exhilarating that even the great Vivian Richards cites it as high light of his career.

Fans enlighten the procedure and motivate the players to perform better by their continuous chanting, waving of flags, Mexican wave and clapping. The fans adore the team that they support and are ready to give life and limb. But they are fickle gods. They support the team as long as the team is doing well. The minute the team is not performing to their expectations the adoration turns to anger and violence. 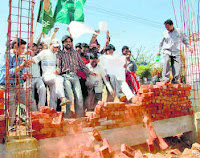 We have had instances of Irate Ranchi fans stoning the house of the captain Mahendra Singh Dhoni. The Pakistani captain suffered the same fate. Recently in Bangladesh the West Indies cricket team bus was mistakenly stoned by irritated fans. The fans thought the bus was carrying the Bangladeshi cricket team! There was also an instance of a fan slapping Greg Chappel the then Indian cricket coach for not selecting a player that he (the fan) liked.

The match had to be forfeited and the image of a sobbing Vinod Kambli walking away from the field left even the most stone heated person’s eyes misty with tears. Check out the famous cricket fans from around the world.

Sudhir Kumar Chaudhary also called as Sudhir Kumar Gautam) is a avid die hard cricket supporter of the Indian cricket team. He first came into lime light by showing up at every match played in India. His entire body was painted in the national colors.

Chaudhary is a devoted fan of Sachin Tendulkar and it has been said Tendulkar provides him with tickets for the all the matches. He has become a celebrity has is seen waving the national flag in the live telecast of the cricket matches. By April 2010 he is reportedly attended nearly 150 matches, often travelling by bicycle. 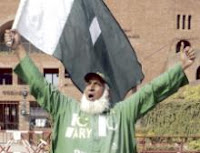 Chaudhry Abdul Jalil also called Chacha Cricket (uncle cricket) is one of Pakistan's most ardent and famous cricket fans
Jalil is regularly seen as a spectator at cricket matches involving Pakistan. He is easily recognized by his white beard, his full green shalwar kameez dress and his white cap decorated with a sequined star and crescent moon. He is always sporting a Pakistani flag.
Jalil was working in Abu Dhabi, United Arab Emirates. He gained popularity by regularly attending cricket matches held in Sharjah wearing a green dress with a white star and crescent on it. As he became more famous, the Pakistan Cricket Board hired him and currently sponsors him to travel around the world following the Pakistan team.

The Barmy Army is a group of English cricket fans which arranges touring parties for some of its members to follow the English cricket team on overseas tours. The name is also applied to followers of the team who join in with match day activities in the crowd, but do not necessarily travel as part of an organized tour.
Barmy army name was given by the Australian media during the 1994-1995 Test series in Australia. The Barmy Army claims it wants to "make watching cricket more fun and much more popular". The group uses flags, banners, songs and chants to encourage the team and crowd participation in their activities.
On the other hand  the fans in Australia are more laid back. For the Australians watching a cricket match is more like attending a carnival. They booze, enjoy themselves and tan below the sun. The slogans and captions written on banners by the Australians are very interesting and thought provoking. The fans in the Caribbean Islands come to a party when they watch a cricket match. There is continuous chanting, dancing and of course lots of boozing.
Posted by Dr. M. Anil Ramesh at 11:09 AM