What do the Ethiopians get in return for the two birr they paid. They get to watch the live telecast and also get a free chilled coca (Coca-Cola). The regular price of the coke in the market too is two birr. So how do Ethiostar or the other hotels that extend the same service get benefited? Simply it’s the hotels’ way of paying back to the society. Most of the youngsters watching the live telecast are from the local community and they are literally the ears and eyes of that area.

And as we know that it is always better to be in friendly terms with the immediate environment in which a business operates. Coca-Cola missed out on building more good will. If Coca-Cola had added some Kolo or a Dabo Kolo, the good will would have increased by leaps and bounds. Delight the customer and make him the brand advocate for a life time!

Come Sunday and we have supporters coming with huge towels or flags with their team colours and logos  and they would boisterously support their own teams. The support for both teams was uniform and other wise close friends almost come to blows over a penalty missed or some injustice meted out to their teams. Arsenal was more popular than Manchester United as Arsenal had more black and players of African origin. Once I watched a Manchester United Vs Arsenal match in BDU auditorium and it will remain as one of the most enjoyable interactions with the football crazy Ethiopians. 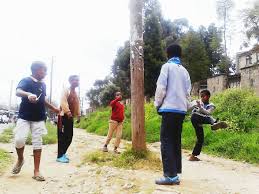 Another interesting ethnic game that I saw being played is ‘Tezer’. In this game first a suitable pole is chosen. A long rope may be of two or three feet is firmly tied to the middle section of the pole. At the other end of the rope a small round ball made by a roll of plastic sheet shoved into socks is fixed. The rule of the game is that the players should not touch the rope to which the ball is tied. Also the ball should not touch their clothes. When kicked, if the ball finishes revolving around the pole unchecked by the player in the defender position, the player who kicked the ball will be a winner. I found the acrobatics involved in the game to be of very high calibre!

I should thank my student and now a distinguished faculty at department of accounting, BDU,  Dr. Elefachew Mossisa who has guided me in identifying this game and telling me its name. Betam Konjo (very Good) and ahmesugenalew  (thank you) . Also I should also thank Hider Ali, who has sent very old and rare photos.I will be use them later Hider. 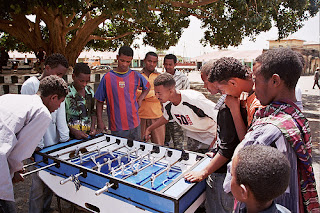 Of course fun loving Ethiopians also play the loud and very boisterously ‘foosball’. Ethiopians call it Joteni (thanks to Dr. Elefachew Mossisa again) . Table football, also called fuzboll and sometimes table soccer. Foosball is a table-top game that uses figures representing football players, fixed on rotating rods.  To begin the game, the ball is served through a hole at the side of the table, or simply placed by hand at the feet of a figure in the centre of the table. The initial serving side is decided with a coin toss. Players attempt to use figures mounted on rotating bars to kick the ball into the opposing goal. Expert players have been known to move balls at speeds up to 56 km/h (35 mph) in competition.

It is a very engrossing game, but tends to get very noisy. In the chilly evening breeze slightly tipsy Ethiopians and sometimes even foreigners engage and enjoy this maddeningly intoxicating ‘foosball”.