Chaithanya Bharathi Institute of Technology (CBIT) – a name to reckon with! - Ethiopian Journey - Blog Post no - 2.

Chaithanya Bharathi Institute of Technology (CBIT) – a name to reckon with!
(512) 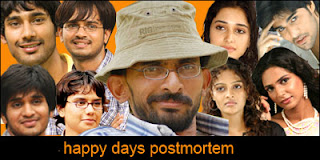 January 1st of 2000 came and went. Nothing new happened. No earth shattering events. The world did not end. I was not very sure whether Poornima was happy or sad!  It was business as usual. All of us slipped back into our own very mundane and regular work schedule. Class Preparation, classwork, assignments, tests, paper corrections, declaring the results and so on. Time was slipping away.

Chaithanya Bharathi institute of Technology, CBIT as it was popularly called was one of the first privately managed engineering colleges in the erstwhile state of Andhra Pradesh. Due to its premier status it attracted bright students and equally bright and competent faculty.

Located at Gandipet it was the dream destination of young engineering aspirants who wanted to carve themselves a name in the field of Engineering. As a well thought our strategy CBIT added Management education to the array of educational services that it provides. School of Management studies (SMS) as it was popularly called was established in the year 1996 and I was offered a faculty position at SMS in the year 1997.

CBIT alumni have excelled in many fields. Envious of their success one student from another engineering college had once commented “You CBIT GUYS! You are so many in California that the area that you reside should be called CBIT Avenue”.

Shekhar Kammula remains one of CBIT’s favorite son. A mechanical engineer by profession, Sekhar Kammula is an ace director who immortalized CBIT throughout the world with his movie “Happy days (2007)”.

The beat would commence at 0940 hours and he along with some other faculty members, would slowly go around the campus and catch errant students who were bunking the classes. Under graduate students of B.Tech would run helter and skelter the minute they saw Prof Ramachandra Reddy. If they were caught, they had it. They were made to stand in front of the principal’s office, their ID card was confiscated and their parents would be called and informed about their ward’s behaviour.

But our Post graduate students of MBA were made of sterner stuff. They would retreat deeper and deeper into CBIT (CBIT’s campus was spread over 100 acres). But Prof Ramachandra Reddy had a very dogged determination. He would pursue them and it was a cat and a mouse game. One day when I was part of the beat, Prof Ramachandra Reddy cornered three or four students in their lair, the canteen.

Prof Ramachandra Reddy indignantly demanded “why the hell are you not in the class?” One of the Post Graduate girl students, Shyamala responds nonchalantly “I am a MBA student”. As if it is birth right of MBA students not to attend classes! The flippant answer caught Prof Ramachandra Reddy completely off guard. Of course the student was suitably counseled later on, but the sheer audacity of the answer blew my mind away.