Bahirdar - By the side of the Sea - Ethiopian Journey - Post 16

By the time we settled down it was almost 6 p.m. We set out for a walk. It was cold. We had taken precautions and were wearing woollens. Ethiostar was in the heart of the city. Right in front of Ethiostar was the Amhara Parliament building. It was an imposing building with many beautiful statues on the front facade. 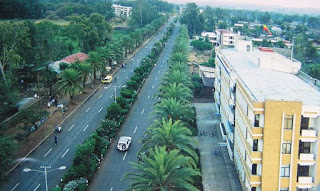 Very close to Ethiostar was POLY, the engineering division of Bahirdar University. PEDA, to whom I belong was around two kilometers away. Walking on the roads was a very pleasant experience. Not many people but lots of love birds. We quickly came back. Dr. Naidu, Associate Professor from the Mathematics Department had dropped in for a visit.

Dr. Naidu was a legend in Ethiopia. By 2002 he had already finished three contracts. He could speak Amharic quite well and was quite adapted to the local culture and customs. He would become our community elder – someone like Peddarayadu.
The next day morning, we decided to take things into our own hands. Dr. T. N. Murthy, Dr. Srinivas Inguva and me headed out to PEDA. The way to PEDA was quite dusty and we had to take a short cut to reach the University. It was a nice stimulating half an hour walk. We made our way to the Management Department/Accounting department.  Dr. T. N. Murthy and I, met Addis Gedefaw, the Head of the Department. She received us very warmly. She said “You came in quite early. We were not expecting you for atleast another week”. She told us subject allocations will be done shortly and that she will inform us when they are finalized. She directed us to the admin department so that we could get our University identity cards and start working.

We came back to Ethiostar and headed for lunch. It was more of the same! All Ethiopian cooks appear to cook the same way. We ordered for rice and after lots of gesticulations and mime asked for  some tomato curry. One hour passed and we were not getting any food! Luckily for us Suresh dropped in and went to the kitchen to investigate. He came back and told us that there was only one cook who could prepare ‘Indian speciality of rice and tomato curry’. He has gone out and there was nobody else who could prepare our dishes! 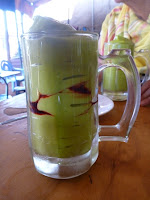 We either have to wait or lump it! Out of desperation we ordered Inkulal curry (Omelette) and Avocado juice. Avocado juice was tasty and very filling. Pranav finished the Avocado juice and wolfed down the Omelette. Suresh was watching on with his mouth wide open in astonishment “Sir” he whispered in a low tone “that omelette had six country eggs! It was meant for the entire family. Do you think, he can digest it?”

I assured “I don’t think we need to worry. He washed it down with avocado juice”. Suresh was almost wailing “that is the problem sir. Avocado juice is very filling. And your son had an ample dose of both. Avocado juice is not like butter milk that will lighten the stomach. It will make it even more heavy”.  I started watching Pranav from the side of my eyes. He did not appear any worse for the wear. He was happiness personified.

The owner was puzzled. He gave a quixotic look “Mister, I said, 12 o’clock in the evening" He glared at me.

I gave up. As I was returning from the photo shop, I saw a poster “13 months of sunshine and below, it was written, welcome to 1995!”. Then it struck me. Oh yes, Ethiopian calendar was seven years behind the English calendar that we follow.

I burst into our hotel room. My family was startled at my excitement. “is everything all right” Padma enquired anxiously “rocking, rocking” I assured her. “Nothing to worry. Do you know Ethiopia makes you younger? Now both of us are seven years younger, and we are back to 1995!”. I Looked at Pranav, gave him a-all-knowing wink and added “Pranav you are back in 1995, that will make you a seven-month old boy. Better behave yourself kiddo”

I and Padma walked out to the balcony and were admiring the scenery. Suddenly we heard loud shouts and then a steady wail coming from the hotel room. We rushed in ashen with fear. The scene inside stunned us. Pranav was seated in a chair and there was a 'cat who had all the cream' look on his face.

He looked smug and contented. On the bed was my two-year-old daughter Sahithi. She was  sobbing inconsolably. After lots of threats, inducements and cajoling, she stopped. We asked “Sahithi, what happened?”. Still sobbing she replied “Anna told me that all our ages go back by seven years. I am born in 2000. What will happen to me? I don’t even exist. Will police arrest me? Can I ever go back to India? If I had known that, this was going to happen, I would have stayed back with nannamma and tatagaru”. She was hurt and disgusted!   We kept a straight face with lot of effort. We dare not burst out in laughter. The poor girl was already in lot of trauma.

“Oh boy” I said to myself “This really takes the cake. Now I have to struggle with three times. The Indian standard time which is 2.5 hours ahead of the European or GMT and also this new Ethiopian time”. I Sincerely hoped that I could manage so much complexity. 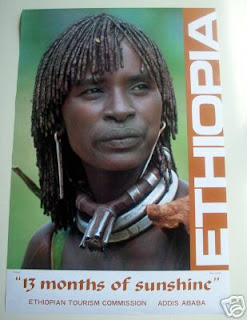 I brightened up and asked the hotel receptionist “I heard that there are thirteen months in a year in an Ethiopian calendar. That is nice. I can work for twelve months and get thirteen months’ salary”.


The receptionist gave me a strange look "oh, the thirteenth month is only a book adjustment. Those five or six days are only to bring the calendar back to normalcy” He gave a very broad and toothy smile “I assure you sir, you will only get twelve months’ salary”.
Posted by Dr. M. Anil Ramesh at 11:28 PM